Nelson Mass (1798), which is also referred to as ‘Missa in Angustiis’ is one of fourteen masses written by Joseph Haydn and is supposedly inspired by Admiral Horatio Nelson’s victory over Napoleon.

The University Choir and Orchestra are composed of AUB & BU students, staff & alumni and are a part of the AUB & BU University Music offering.

Haydn’s Nelson Mass will be performed alongside three other exciting pieces: 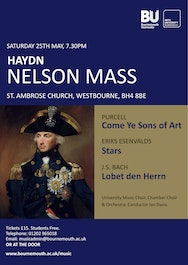