You're invited to join Huddle!

Join our free online series of conversations with leading industry figures to explore, discover and ask questions about contemporary practice and cutting-edge research.

Book your ticket for free below. 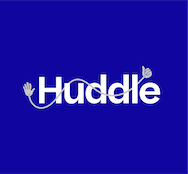 Claire Collins is a British costume designer, mainly working within TV. Graduating from Arts University Bournemouth in 2003 she went on to win the BBC Vision design award, catapulting her into the world of film and television. Working mainly within Period drama Claire built up her knowledge and passion for costume design, fabric and prints. Her style combines her understanding of period silhouette and textiles with her eye to tell a story through colour and composition within a set. Mainly working in the Midlands as she raises her family Claire was nominated for a Midlands RTS award in 2019 for her work on BBC Father Brown. Utilising costume design as a vehicle to tell a story will forever be a thrill.

Andrew Bracey is an artist and curator based in Waddington, Lincolnshire. His practice hovers on the fringe of painting as it crosses over and expands into curating, installations, sculpture, drawing and animation. He is currently teaching as Senior Lecturer in Fine Art at the University of Lincoln.

Ashley Brown is an internationally respected artist and developer based in Coventry creating emotive and nostalgic experience using code, electronic and sounds. With 10 years of experience working professionally with a wide variety of cutting edge and non-traditional software and hardware, he joined the AUB team in October 2020.

Within his own practice, Brown explores shared emotive experience using technology as his medium to create his own digital playgrounds.

Commercial Photography Alumna, Montana Lowery is a photographer whose work focuses on fashion and portraiture. Her work has been in various exhibitions such as The Lang Art Gallery and The Print Space. Lowery’s work has been featured in international publication such as Stella, Mod Magazine, Factice and many more.

Zavier Ellis is an international gallerist, curator, artist and collector. Born in Windsor, he studied History of Modern Art at Manchester University before undertaking a Masters in Fine Art at City and Guilds of London Art School. Ellis is the Founder and Director of Charlie Smith London, a vibrant contemporary art gallery and the co-founder and co-curator of the museum scale exhibition for emerging artists The Future Can Wait, which between 2011 and 2014 was organised in partnership with Saatchi’s New Sensations. As well as curating exhibitions globally, Ellis’s work has been featured in notable collections including the seminal Sammlung Annette und Peter Nobel, Zurich.

British animator Joanna Quinn is a highly acclaimed and major figure in world animation. She is renowned for her drawing skills, her wonderful characterisations and her humour. The politics of gender and oppression together with Joanna’s obsessive fascination and delight with exploring the eccentricities of the human body, are the central themes of her work.

Joanna has won just about every major animation award there is — including Emmys, Baftas, and over 90 Jury prizes at major animation festivals — and two of her films have received Oscar® nominations. She has been awarded Honorary Fellowships and a Doctorate at four UK universities including the Royal College of Art and has lectured extensively at universities and Film Schools in Britain and abroad. She is currently completing a new film ‘Affairs of the Art’ with Producer partner Les Mills.

You can find out more: berylproductions.co.uk 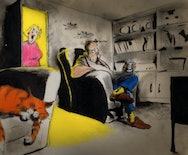