Free-Range, a celebration of art and photography, transforms huge warehouse spaces at the Old Truman Brewery in East London for three weeks, showcasing work from over 800 students, from 50 institutions.

Whilst at the exhibitions, we caught up with some of the class of 2019 AUB graduates to find out about their work, how they found their time at AUB, and what future plans hold: 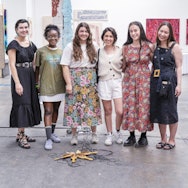 Could you tell us a little bit about your collaborative work?

This performance, 100 Brushes, is based on female sisterhood, our collaborative group name is Thiasos, which is from Greek mythology. Our work stemmed from ideas and research from mythology.

The first performance that we did was at an open mic night at Stella’s house, called A Night At The Triangle, and that was our first rehearsal of the piece. We had contact mic’s attached to hairbrushes that captured the sound of hairbrushing and really amplified the sound.

We all sat in a circle brushing one another’s hair, in a ritualistic way and whispering. So it can come across quite obsessive and ritualistic.

“A sisterhood dressed in white and connected by touch.

A delicacy offered from their presence veils over the stubborn architecture of the venue.

An intimate ritual juxtaposed to the hypnotic, repetitive sound of hairbrushes.

A private moment that discloses a soft female sexuality while simultaneously exhuming purity.” – Thiasos, a collaboration

How have you all found the course and your time at AUB?

We found it a collaborative time, certainly got to grips in the second-year with working with others. There are quite a few collectives that have been formed from the Fine Art course.

As well as a lot of collaborations going on there’s also a lot of mutual help amongst the students on the course, especially in the third-year. It’s really good to double up on practices.

It’s equipped us to go out into the world and build something from scratch on our own, and with people around us, as opposed to stepping out and stepping into someone else’s shoes, or being in someones shadow. It’s made us feel confident to build something on our own and with friends.

Finally, now you’ve graduated, what’s next for you all?

Maddison: I’ve been lucky enough to be accepted as the Graduate in Residence for the Fine Art course at AUB, which is a really fantastic opportunity. It really gives you a step into the professional art frame.

Elena: I’m going on to progress my studies in an MA in Fine Art at the Royal College of Art, London.

Stella: I’ve been lucky to get an exhibition out of the final show – it shows that people are seeing my work and they are responding, which is amazing. I’ll also be part of the Student Union at AUB as the Vice President. 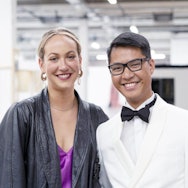 Could you both tell us a little bit about your work?

Laura: I use the human form to understand how we, as consumers, see the human form as an actual concept within the painting itself. So, I want the viewer to concentrate on the medium itself, in this case painting – acrylic, oil, pigments and the layers itself, I want that to be what catches the attention within the shape of the body.

Rathamanoon: For my work I looked at the human connection to the world, anthropocene. I have played around with materials and tried to create an intervention between our relationship between the planet and the environment. So, what I have done with my work is created these tiles and people are able to walk on top of them to destroy them, and that activates the work. This then makes the audience a participant to the anthropocene.

Laura: Is a very self led course, you have to be very self motivated. With the help of tutors and the workshops available I think you can extend and develop your concepts further.

It’s been a good experience, and I think it encourages you to push that step further, it’s a good start for the real world.

Rathamanoon: I think my time has been very interesting. It’s been very independent. I didn’t think from AUB I would get as many opportunities as I have – I have other shows coming up, which is great. I feel as though it’s been a fun time!

Laura: Having different studios you can work in, we work together and collab, it’s been great for that.

And now you’ve graduated, what’s next?

Rathamanoon: I was going to go into teaching abroad, but that’s been put on hold for now as I have some gallery exhibitions coming up in September.