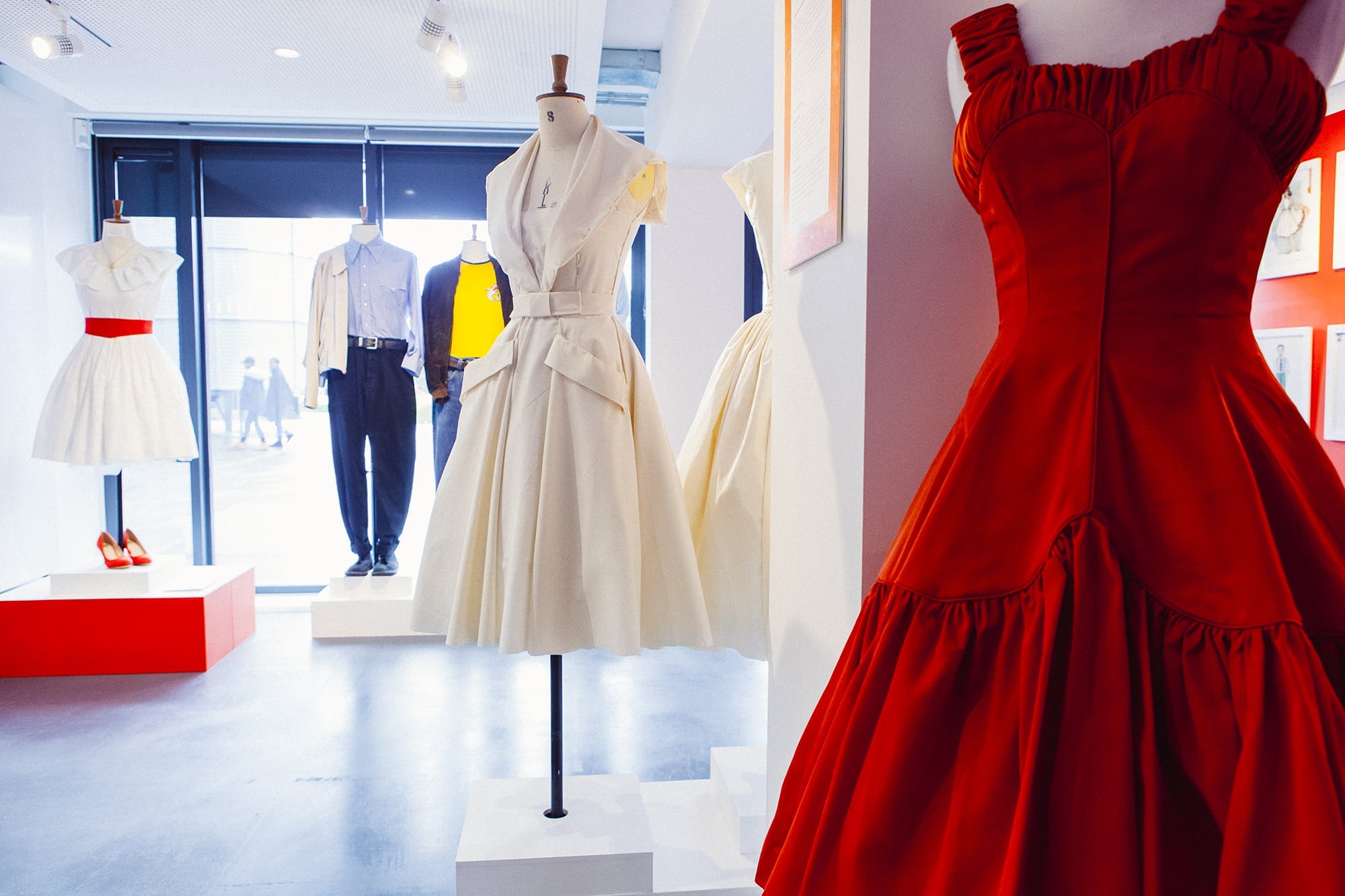 An exhibition by BA (Hons) Costume and Performance Design in association with Bournemouth Symphony Orchestra.

West Side 360° exhibition is a response by students in BA (Hons) Costume and Performance Design, to a live brief from Bournemouth Symphony Orchestra (BSO).  The students were asked to design a set of costumes inspired by the  concert Song and Dance (Adams, Rachmaninov, Bernstein & Gershwin), sponsored by Arts University Bournemouth.

This exhibition presents the work of the second year students and focuses on costume cutting, costume sourcing, scenography and costume design inspired by the celebrated American musical West Side Story which is featured in the Bournemouth Symphony Orchestra Performance. The musical, originally staged in 1957 and based on Shakespeare’s Romeo and Juliet, was directed and choreographed by Jerome Robbins, with music by Leonard Bernstein and lyrics by Stephen Sondheim.

The story is set in the Upper West Side neighbourhood in New York City in the Mid-1950’s and examines the racial tension and rivalry between teenage gangs: the White Jets and the Puerto Rican Sharks. The dark and disturbing focus on social tensions, sophisticated music, extended dance themes marked a turning point in American Musical Theatre.

This exhibition gives an insight into the complexity and breadth of work that the students complete as part of their curriculum and the variety of different technical skills that they need to master, showcasing digital and analogue costume design, scale model making exercises, calico toile pattern making, as well as sourced and styled vintage costume.

This project was originally conceived in preparation for the concert Song and Dance (Adams, Rachmaninov, Bernstein & Gershwin), performed by the Bournemouth Symphony Orchestra on the 22nd March 2017 and sponsored by Arts University Bournemouth.

This performance will feature the score for West Side Story, revisited by Bernstein in 1961, who extracted nine sections to assemble what he called the Symphonic Dances. The suite opens with the famous confrontation of the Jets and the Sharks. The haunting strains of Somewhere contrast with the lively Latin dances of the Mambo and Cha-cha. The Cool fugue features a 12-tone scale, and segues into the final, deadly fight between the gangs in Rumble, whilst a solo flute plays I Had a Love to close the suite, which ends, like the musical, on a haunting, unresolved chord.

Rebecca Pride graduated as a theatre designer from the Slade School of Fine Art in 1988. After twenty years in the theatre industry, Rebecca joined the AUB in 2005 and became Course Leader and Principal Lecturer (Research and Knowledge transfer) for BA (Hons) Costume and Performance Design in 2009. Rebecca believes passionately in an experiential method of teaching. As a result, she has developed a curriculum within the course that allows students to take part in a wide variety of ‘live projects’ with other courses at AUB and with external theatre and film companies. The course is unique in the UK for delivering teaching in four distinct areas of practice that can lead to named awards in Scenography, Costume Design for Screen, Costume Supervision and Costume Interpretation.

Rebecca has curated all the BA Costume final year exhibitions since 2009. The AU79 (Gold) show for 2015 was a particular triumph and Rebecca commissioned the graduate designers from that show to design the 2015 A Stitch in Line exhibition in TheGallery at AUB: a show that celebrated and redefined the centrality of drawing as a conduit for creative expression in the work of textiles artists as well as fashion, costume and performance designers.

In 2016 Rebecca curated the Drawing Theatre: Pamela Howard installation. This show was the culmination of a very productive creative collaboration between Visiting Professor Pamela Howard OBE and the BA Costume and Performance Design course team and students. Rebecca was honoured to be given the opportunity to curate such a significant scenographic event within the environment of the Sir Peter Cook’s Drawing Studio.

The West Side 360° exhibition presents the work of the second-year BA (Hons) Costume and Performance Design students, who, this year, have investigated the celebrated American musical West Side Story, focusing on costume cutting, costume sourcing, scenography and costume design for film. This pop-up exhibition gives an insight into the complexity and breadth of work that the students complete as part of their curriculum and the variety of different technical skills that they need to master, showcasing digital and analogue costume design, scale model making exercises, calico toile pattern making, as well as sourced and styled vintage costume.

Rebecca has recently been commissioned to write a book entitled, The Costume Supervisor’s Toolkit: Supervising Theatre Costume Production from First Meeting to Final Performance. This work has been the focus of an AUB research fellowship that Rebecca was awarded by AUB in 2016.

Mandy Barrington is a Senior Lecturer in BA (Hons) Costume and Performance Design at the Arts University Bournemouth with a first class honours degree in Costume design and a Masters in Costume. Mandy has been teaching our next generation of costume makers for over 14 years. Mandy has also taught internationally in both Japan and Taiwan, delivering specialist courses in textiles, historical pattern cutting and costume making techniques to fashion students. She has also supported the university and international department through her promotional visits to the Far East.

Mandy has worked professionally making costumes for shows such as My Fair Lady at the National Theatre, London, the hit West End show Wicked, Sleeping Beauty at The Royal Opera House and more recently the BBC Birmingham production of Father Brown. Within her role of Senior lecturer she uses her experience of pattern drafting and garment construction to support the production of costumes for live projects, these have included the 2012 Olympic Opening Ceremony for the Sailing events, professional theatre productions at The National Theatre, London, The Theatre Royal, Winchester, Angel Exit Theatre Company, Dorset Corset Theatre Company, The Theatre Royal, Bury St Edmunds, Oxford Playhouse and as well as in house productions with BA Acting.

Mandy has a passion for applying her practical approach to the creative arts and has worked to develop a pattern system that supports the creation of historical patterns for a modern body shape, this vital ongoing research has furthered her knowledge and pedagogic practice. This has led to a recent publication on pattern drafting, titled Stays and Corsets: Historical Patterns Translated for the Modern Body, published by Focal Press in December 2015.