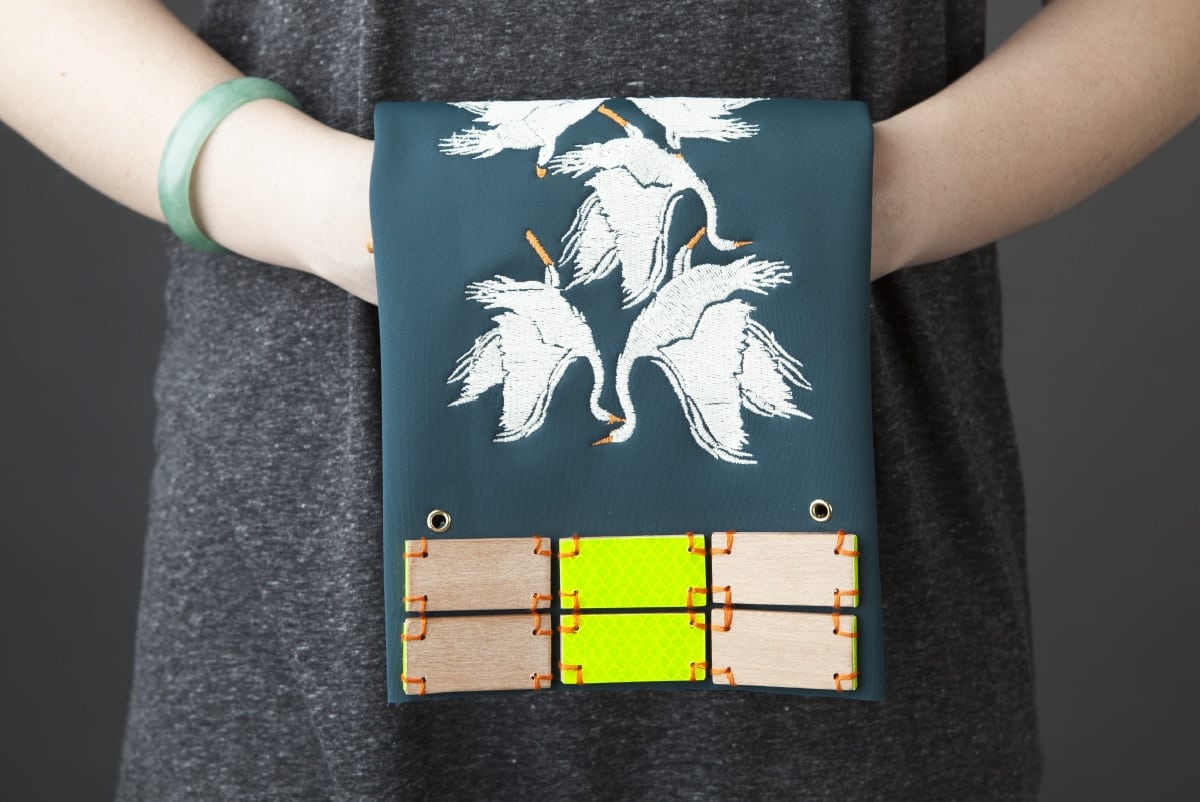 A celebration of drawing and stitch through Costume, Fashion and Textiles.

This exhibition seeks to redefine and examine the centrality of drawing as a conduit for creative expression in the work of textiles designers as well as fashion, costume and performance designers. We draw to discover and express ourselves. We use any manner of tools to do this; pencils, paints, a sewing machine, a needle or a CAD programme to solve and explore the puzzle that the work or creative problem forces us to examine and scrutinise.

A stitch in time and stitch in line. The physical properties of cloth and the variety of fabrics that our work encompasses constantly challenge and astound us. The stitch that connects cloth, the stitch that draws a line, the elaborate stitch and the simple stitch, the connected and the disconnected stitch, the authentic stitch. All are valid, all are central to the creation of our work.

Anne Chaisty joined the Arts University Bournemouth in 2009 as Course Leader for BA (Hons) Fashion Studies. Anne’s specialist area of research is ‘The representation of Beauty Diversity in the Fashion Industry’.

Her first teaching post was in illustration at the University of Derby  In April 2011 Anne was invited to give a specialist Lecture on Fashion Jewellery to MA Fashion Students at Instituto Europeo di Design in Milan and in 2012 was awarded by the organisation ‘All Walks Beyond Catwalk’ title of ‘ Fashion Diversity Activist’.

In 2014, Anne became a Member of the Executive Committee for Graduate Fashion Week.  Her Current research includes ‘Beauty by Design’ – Fashioning the Renaissance, an Exhibition launched at the National Portrait Gallery in Edinburgh in November 2014 and ran until May 2015

In 2015 Anne presented a collaboration with Lectra and Burberry at the seventh International Education Congress, Paris, highlighting transformation in the fashion industry and education. A second lecture on Fashion at AUB’s delivery of Lectra was given by Senior Lecturer Pat Grice at the Royal College of art in September 2015

She was invited as a consultant from Fashion Education to discuss ideas for a Fashion and Design hub for the Power House project, the regeneration of Battersea Power Station.

Anne has recently been invited to the House of Commons on 1st December 2015 by the Chair of the All Party Parliamentary Group on Body Image to engage in a Select Committee debate on the legislation for models and required BMI.

Anne-Marie Howat leads the BA (Hons) Textile course and is Principal Lecturer (Teaching and Learning) for the Textiles/Fashion subject area.

After completing her degree in Textiles at Loughborough University, and then her Masters at the University of Central England (now Birmingham City University), Anne-Marie Howat has been a practicing textiles designer for over 25 years, working across the breadth of the discipline as a creative designer maker. During the last 20 years, she has also played an important part in the development of the discipline through her involvement as an educator. Invention in design spurred her interest in teaching and communication and she became a lecturer on a variety of courses at various universities and colleges across the UK, ranging from costume & set design to textiles, culminating in 2008 when she established the Textiles degree course here at the Arts University Bournemouth.

Anne-Marie has pursued a variety of projects and commissions within her professional career, predominantly using her skill set of embroidery, surface manipulation and print. Professionally she has enjoyed a variety of employment including being a full-time print and embroidery designer for the UK’s fashion industry (including brands such as the Conran Studios, M&S etc. and also selling work to Milan based fashion houses).

Anne-Marie, additionally, has continued to work as a freelance designer with agents in both London and New York, selling internationally for both trends and commercial design.

Her work has also included that of which has been commissioned for interiors and large-scale public spaces, with clients in the UK, Germany, Switzerland, and Holland. These included textiles installations in Lingen (Town House Grand Hall entrance), Textile installations for the Derby Dance Centre, interiors prints for Texoprint & Heberlein (Holland, and Switzerland) and a large-scale private commissioned embroidery for the Rothschild family home in Little Venice, London.

Whilst employed at the Arts University Bournemouth, Anne-Marie’s practice has also encompassed arts based group shows including: the Meeting Place, Text+Work, and Flockage, exhibited at the AUB gallery and the Russell Cotes Art Gallery Bournemouth.

Currently Anne-Marie is working to a large-scale public space commission for Salut Maroc Hotel in Essaouira Morocco. She is developing designs for the entrance involving decorative textiles and lighting design for the central atrium, working alongside local artists and makers.

Anne-Marie has gained awards for her couture fashion fabrics including the Vogue Conte Nast Publication award, with commendations for her colour work from Pantone. Also the Texprint Award exhibited at Heimtex, Frankfurt, Germany and for her work in interiors, including The Furnishing Fabric Award from House and Gardens and the New Designers Award exhibiting at Decorex London, and at international textile trade shows.

Rebecca Pride joined the AUB in 2005 and became course leader for BA Costume and Performance Design in 2009. A scenographer by profession since 1988, Rebecca believes passionately in an experiential method of teaching. As a result, she has developed a curriculum within the course that allows students to take part in a wide variety of ‘live projects’ with other courses at AUB and with external theatre and film companies.

Rebecca has curated all the BA Costume final year exhibitions since 2009. The beautifully designed AU79 (Gold) show for 2015 was a particular triumph and Rebecca was very pleased that Steph Navarro and Ayesha Grosvenor – Ejjayha were able to come back to AUB as graduates to design this show, A Stitch in Line.

In 2012, Rebecca and the costume team were nominated for medals in the Higher Education Podium awards (London 2012 Cultural Olympiad) for their work on the Battle for the Winds and Breathe projects. They were awarded a Silver medal for Best Creative Cultural Project for Battle for the Winds and a Bronze medal award for most successful Student Led Activity for Breathe.

Rebecca is engaged in pedagogical research into effective teaching methodologies for designers and costume supervisors. This work formed the body of her PGCE thesis on the idea of developing ‘ Designer thinking’ amongst student scenographers. The idea of creating ‘The Backstory’ for set and costume design (in the manner of Stanislavski’s ‘Method’), has also been the focus of research by Rebecca.

Rebecca has recently been commissioned to write a book entitled, The Costume Supervisor’s Toolkit: Supervising Theatre Costume Production from First Meeting to Final Performance. This work will be the focus of an AUB research fellowship that Rebecca is delighted to have been awarded by AUB.