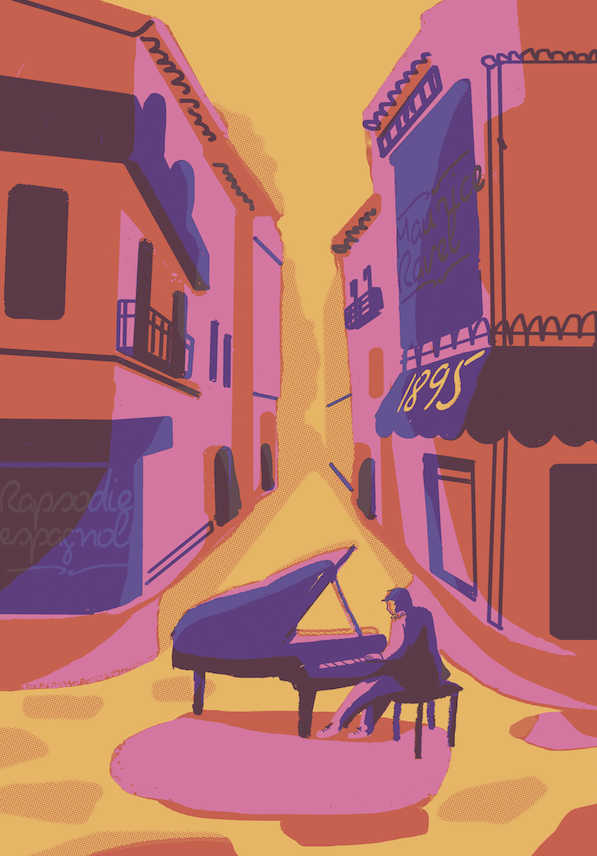 The exhibition is a response by staff and students in BA (Hons) Illustration to the concert, Picture Perfect performed by the BSO, sponsored by Arts University Bournemouth.

Pictures at an Exhibition will present the work of BA (Hons) Illustration while focusing on the composers, Modest Mussorgsky and Maurice Ravel, creating illustrations inspired by their compositions. Specifically, the exhibition replicates Mussorgsky finding inspiration for his compositions from a series of illustrations created by Russian Architect, Viktor Hartmann in an exhibition.

The intention for this exhibition is for a contemporary take on the interplay between music and visual art, this time with roles of artist and compositor reversed.

In part, the exhibition is Mussorgsky’s musical homage to a talented friend, inspired by a visit to a posthumous exhibition. One of Mussorgsky’s great gifts was the ability to capture the essence of a character, mood, or scene in brief, striking musical imagery. His imagination goes far beyond the immediate visual stimulus of the paintings, which are brought into even more vivid detail through Ravel’s orchestral magic.

The concert programme comprises of works by Ravel to include his orchestration of the featured composition with the domestic arrangements largely covered by the BSO. The exhibition will consist of a video piece responding to the life and work of Ravel, together with the series of prints from the program.

The prints have been specifically commissioned for the production and will each correspond to different aspects or biographical events inspired by the compositions performed on the night.

This project was conceived in preparation for the concert Picture Perfect (Debussy, Ravel and Mussorgsky), which will be performed by the Bournemouth Symphony Orchestra on the 7 March 2018 at the Lighthouse, Poole and sponsored by the Arts University Bournemouth. Featured in two stages, the project consists of a pop-up exhibition on the night of the concert at the Lighthouse, Poole and a complete exhibition following the concert, in the Live Project Space, AUB.

Vincent Larkin is an artist, illustrator and lecturer in illustration at the Arts University Bournemouth. Despite being born in Melbourne, Australia, he has lived most of his life in the UK. His practice is based around the idea of the uncomfortable narrative; the overlaps and diversions in the way we tell the story of ourselves. In the pursuit of this he works with the form of the book, printed media, web-based media and sometimes song.

Vincent was named Artist in Resident as part of the speed residency program for the Victoria and Albert Museum. This research project into the Harry Hammond popular music photograph collection resulted in a handmade illustrated book, together with video work and a live musical performance in the entrance hall of the V&A.

Through music-based projects and collaborations, Vincent released LPs with labels such as Upset the Rhythm and Gringo Records. As part of the band Spin Spin the Dogs he has performed at venues and arts festivals across the UK, in locations such as the ICA in London and the BALTIC in Gateshead. This project represents a further enquiry into the surprising, exciting and sometimes awkward interplay between the visual and the performed, between the cultures of music and visual arts.

Vincent was responsible for the curation of the exhibition and the accompanying AUB concert programme which features the exhibited artwork.

Each of the 9 prints that are being featured in the exhibition have been hand-printed in editions of 10. These editions are available to purchase unframed.

Hand Printed Illustration Screen Print
Unframed
Edition of 10 prints
Each print has been signed by the artist.

Instruments at an Exhibition. 2018. Laura Franx

Serving the South and South West of England, but with a national and international reputation, the Bournemouth Symphony Orchestra has been a cultural beacon since its foundation in 1893. The Orchestra performs over 150 concerts each year in its home territory of over 10,000 square miles, from full symphonic concerts in Poole, Bournemouth, Exeter, Bristol, Portsmouth, Basingstoke, Cheltenham, Brighton and beyond to intimate ensemble performances in smaller venues.

The BSO also tours internationally and has appeared on many of the world’s great stages including Carnegie Hall, New York; Concertgebouw, Amsterdam; and Musikverein, Vienna. Since the first pioneering recordings in 1914, the BSO now has over 300 recordings to its name. Recent releases include a complete Prokofiev cycle, a critically-acclaimed collaboration with James Ehnes and the top-selling classical recording of 2012 in partnership with Nicola Benedetti.

The BA (Hons) Illustration course at AUB promotes a dynamic learning experience based upon critical discourse within a vibrant creative studio environment. Individual development is supported and nurtured through experimentation, exploration, innovation, and risk-taking.

The courses ethos embraces an expansive notion of illustration, recognising the potential for it to be seen as a wild frontier of creative potential within an increasingly interdisciplinary contemporary landscape. The breadth of practice encouraged by the course is considered essential to meet the challenge of emerging dialogues from both the more traditional basis of illustration through to the opportunities offered by exciting and new hybrid forms of culture and media.

TheGallery works with courses right across the university on a variety of exhibitions, events and projects. Pictures at an Exhibition is another example of one of these projects that we have worked on with the curators. When working on a collaborative project, we provide advise and support for the curatorial and technical aspects of the exhibition, as well as advice on event and project management.

TheGallery provides a national and international public platform for the arts and these projects within the sub-region as we promote the University’s shared passion for excellence in education, industry  and the sector. The BA (Hons) Illustration working with the BSO is a clear example of this as they provide the students with key insights into the industry and develops their skills.