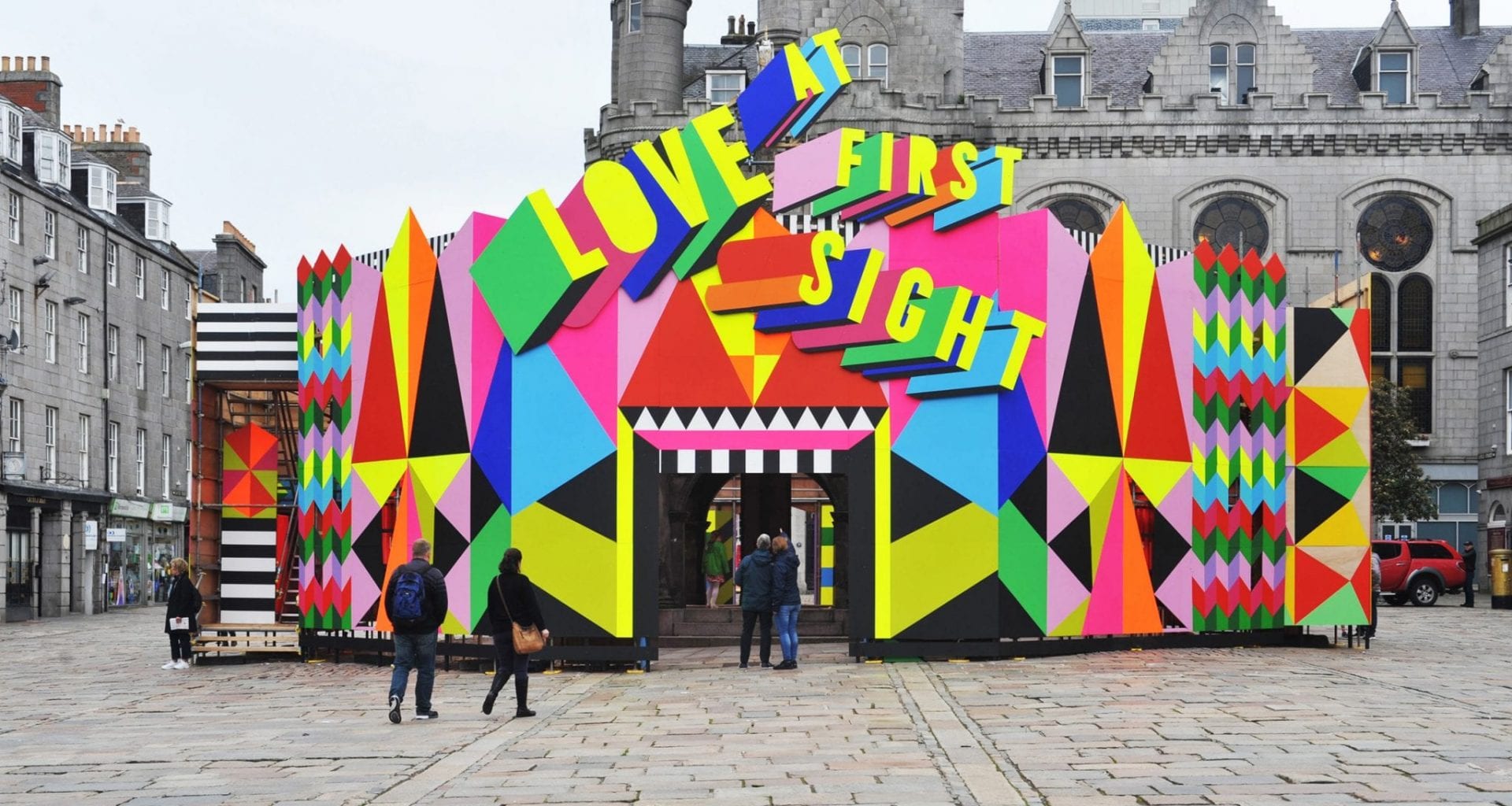 An exhibition of work by Morag Myerscough, AUB Honorary Fellow (2012).

“I had an amazing upbringing and very much felt that I belonged to my family household, which consisted of my Scottish mum and grandmother, London dad, and two sisters (I am the middle child), and next door was my French grandmother, grandfather, uncle, aunt and two cousins in a very tight family unit living side by side in two terrace houses in Holloway, London, but when I was at school I found it hard to fit in and always had a feeling of being an outsider. This was incredibly strong when I left home. As I went to St Martin’s in London, my hometown, I missed out on halls, so when I moved from home everybody had got their flats together. For 1 year I did live in a flatshare, but it was a horrendous experience, so from the age of 21 to 30, I lived in bedsits on my own, as that is all I could afford at the time. I needed to find my own sense of belonging that I made for myself and eventually, at the age of 42, I found it in the form of my current building I live and work in with my partner Luke Morgan (whom I often collaborate with on projects) and (then Lemmy) now Elvis my westie dog. It gave me the freedom and space I had not realised was what I had been searching for all those years. Once I understood what Belonging meant to me, I wanted to work out how to make work that people could belong to, they were part of and they could own.

The use of materials are incredibly important in my work and I don’t want to make things just for the sake of it. The structural pieces in the exhibition are made from reusing pieces of work from past projects, every piece has a story. The walls are filled with fragments from my life and how they weave into my work and appear at different times, the importance of layering and how life is not linear, how everything ends up being connected.”

Morag Myerscough is well known for her large-scale structural installations which bring colour and life to public spaces across the country and internationally. Her work can be seen in Sheffield children’s hospital, Burntwood School, Design Museum, London and recent temporary installations from Aberdeen to Australia and New Zealand where the sense of place is understood and developed in collaboration with the local communities.

This exhibition will provide an understanding of the creative processes behind Morag’s work, with the opportunity to experience her studio space, where fragments of past works sit alongside new projects.

Morag’s mantra is ‘make happy those who are near and those who are far will come’.  Born and Bred, London, Morag has always lived in the city and has been fascinated by how colour pattern and words can change urban environments and peoples perceptions of spaces into places.

From schools and hospitals to cultural hubs and town centres Morag transforms public spaces by creating engaging experiences for everyone. The Temple of Agape built for the Festival of Love on London’s Southbank in 2014 used public space to create an open, interactive symbol of devotion to love in all its forms.

Her strong visual approach is instantly recognisable and elevates every context in which it is placed. Her work is rooted in creating a sense of joy and belonging for all those who encounter it. Morag creates specific local responses to each distinct audience that will see and experience the work, using it to create community and build identity.

She often works with community groups to develop ideas that reflect the identity of the users, drawing on shared cultural history and heritage of the local area. Morag’s visual vocabulary is inclusive by nature and its effortless energy resonates both visually and emotionally with audiences well beyond geographical and cultural boundaries.

Morag’s contribution to educational environments was recognised in 2015, when her work with the architects Allford Hall Monaghan Morris culminated in Burntwood School, London winning the Stirling Prize for Architecture.

Morag was made a ‘Royal Designer for Industry’ RSA in 2017.

Morag is obsessed with ‘Belonging’ and talks around the world about it.

Morag’s work has been widely published around the world for her social approach and her distinct use of colour and pattern often incorporating positive messaging.

Sally Hope has twenty-five year’s experience of working within the design industry, both in professional practice and in education, this provided Sally with many creative challenges and rewards.

Sally has been recently focusing on the records of memory and experience found in postcards. Sally has considered how the postcard is a record represented through both image and narrative and has explored the relationship between these subjective and personal records and the factual records represented in archives.

Special Thanks to Morag Myerscough, Luke Morgan and Elvis.

Morag Myerscough was made an AUB Honorary Fellow in 2012.

AUB make the awards of Honorary Fellowship to persons who have made a significant contribution to the field of arts, design, media or performance in a professional capacity or an educational role.

‘One Piece of Advice’ is an Alumni Project for the next generation of creatives.

Some of the brightest AUB Alumni, Honorary Fellows and community have offered up their ‘One Piece of Advice’ to those starting out in the creative industries. Morag Myerscough gave AUB an interview.

BA (Hons) Visual Communications had honorary fellow Morga Myerscough to work with students on a half-day installation workshop in the Viscom studio.