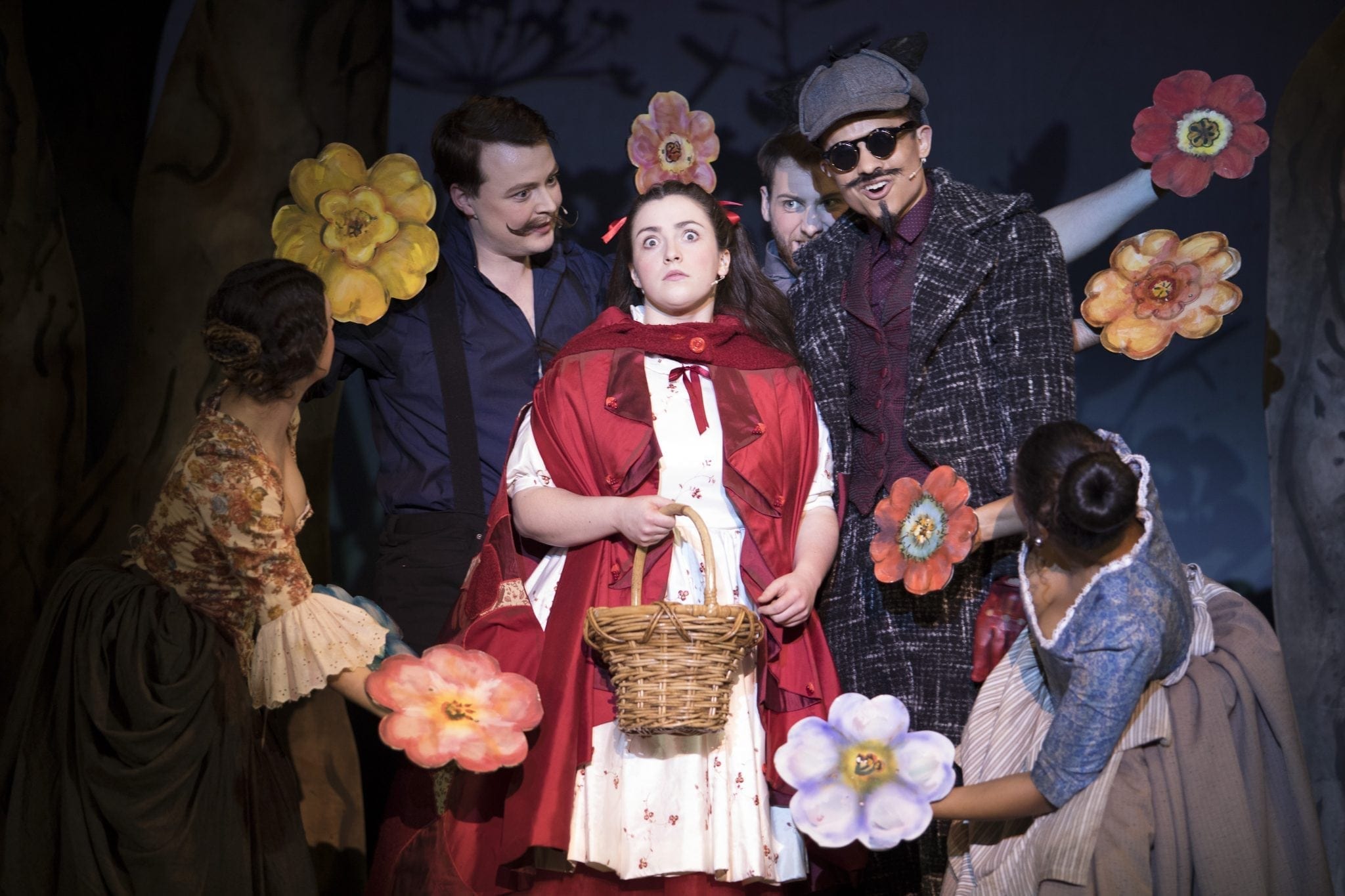 Magical Fairytales is a response by students, to a live brief from the BSO. The students were asked to respond to the concert featuring compositions by Ravel, Rachmaninov & Stravinsky, which will be performed by the BSO on 6 March 2019 and is sponsored by the Arts University Bournemouth. A selection of the work will feature in a pop-up exhibition at the Lighthouse on the night of the concert.

BA (Hons) Illustration students will respond to Petrushka by creating dynamic wordless narratives celebrating the ballet and Stravinsky’s score. On display will be the original images offering visual responses to the source material.

Carol Ann Duffy’s adaptations of Grimm’s Tales in her provocative poetry collection The World’s Wife form the inspiration for the BA (Hons) Costume and Performance Design creations. Displayed in the exhibition will be ten original costumes, set design models and three costumes from the AUB’s production of Into The Woods. Also included will be a newly commissioned costume made by Senior Lecturer, Wayne Martin.

Dr James Cole
Dr James Cole is the course leader for AUB’s new BA (Hons) Creative Writing course. James attended the University of Southampton where he undertook a BA (Hons) in English Literature and an MA in Creative Writing. He consolidated his studies with a PhD in English Literature and Creative Writing, also at Southampton, where he has since taught on various modules, including the Lifelong Learning programme. For the past six years, James has led workshops and held community-based residencies within the local area, hoping to foster a love for reading and writing. His novel, Reading Through Binoculars, was shortlisted for the Dundee International Book Prize 2016 and he is developing a Young Adult novel with Curtis Brown literary agency in London.

Since 2012, Lauren has taught Creative Writing at Undergraduate level, both at Exeter and Plymouth universities, and in September 2018 she took up the role of Lecturer in Creative Writing at AUB. In this role, Lauren works to strengthen the interdisciplinary ethos by building new links between academia, industry and the community. In addition to the ethics of representation, Lauren’s research interests include Digital Humanities and Digital Creative Writing; writing for wellness and the use of green spaces; identity politics and the ownership of stories; writing and teaching diverse characters, and; the use of power and religion in dystopian fiction.

Heidi Steller
Heidi Steller works part-time here at AUB as a Technician Demonstrator, supporting students on BA (Hons) Costume and Performance Design. She trained at Nottingham Trent University as a Theatre Designer and has an MA in printmaking from Camberwell College of Arts.

Heidi has spent the last 20 years working extensively in theatre design for both small and large scale shows. She specialises in Outdoor Theatre, Celebratory Arts and Scenic Art. Her work includes large-scale sculptural pieces with outdoor arts company Emergency Exit Arts for events such as the Thames Festival in London and as a designer and collaborator for outdoor theatre piece Cloudscapes with Dorset based theatre company Gobbledegook Theatre. Heidi also likes to spend as much time as possible with her treasured etching press and exhibits her printmaking wherever she can.

Stravinsky’s great ballet has gone through a fascinating series of metamorphoses since first conceived as a concert piece, inspired by the immensely popular puppet plays of 19th century Russia. The score is one of his most brilliant achievements, bursting with the energy and inventiveness of youth. The depth of characterisation is astonishing; Stravinsky gives the melancholy puppet enough personality to make listeners care about him, without letting us forget that he is made of straw and cloth, not flesh and blood.

Audiences were already familiar with the Second and Third Concertos before Rachmaninov revised the First in 1917. It is very different from his later works; in exchange for fewer memorable melodies, this concerto incorporates elements of youthful vivacity and impetuosity in a concise and spirited fashion. Emerging from an exquisite piano suite for four hands based on the Mother Goose tales, Ravel’s full ballet music contains his musical fingerprint at every turn: melodies are clear, the orchestration is elegant, rhythms are precise, and the harmonies evoke a delicate, magical world.

Pictures at an Exhibition
Curated by Vincent Larkin

The exhibition was a response by staff and students in BA (Hons) Illustration to the concert, Picture Perfect performed by the BSO, sponsored by Arts University Bournemouth.

West Side 360°
Curated by Rebecca Pride and Mandy Barrington

West Side 360° exhibition was a response by students in BA (Hons) Costume and Performance Design, to a live brief from the Bournemouth Symphony Orchestra (BSO).  The students were asked to design a set of costumes inspired by the concert Song and Dance (Adams, Rachmaninov, Bernstein & Gershwin), sponsored by Arts University Bournemouth.

The Firebird, Diaghilev and the Ballets Russes
Curated by Adele Keeley, Wayne Martin and Bunny Winter.

Students from BA (Hons) Costume and Performance Design produced a collection of designs in response to The Firebird, which was on display at the Lighthouse Poole on the evening of the performance.

After the Show is Over
Curated by Katharine Piercey and Kenneth Robertson
Exhibition Designed by Alexander White, BA (Hons) Costume and Performance Design Alumnus

As the BA (Hons) Acting course reached its 70th production in autumn 2017, this exhibition celebrated the diversity and collaborative nature of the course, and the work it has produced over the years.

Fifteen key productions were selected for the exhibition to show the course’s wide-ranging genres and its engagement with various industry partners. These included professional guest directors, external venues and partnerships on five musical productions to date with BSO’s new music ensemble, Kokoro.

The Boyfriend
Presented by staff and students from AUB’s performance and design courses and in collaboration with Kokoro, BSO’s New Music Ensemble.

Sandy Wilson’s gloriously pastiche musical is set in a girls finishing school in the carefree world of the French Riviera in the Roaring Twenties. The original 1954 production ran for 2,078 performances making it briefly the third-longest running musical in West End or Broadway history. The songs such as The Boy Friend and I Could Be Happy With You became the pop songs of their day and are just as wonderfully catchy now as they were then.

Threepenny Opera, like Beggar’s Opera upon which it, brings classic Italian opera of the elite to the masses in thought-provoking tales of the society around us. Bertolt Brecht’s “epic” approach to theatre was not to get the audience to connect with the characters or situations on stage emotionally, but to provoke thought, self-reflection and a critical view of the action before them.

The Soldier’s Tale
A unique collaboration between students from AUB and Kokoro, BSO’s New Music Group, produced an elaborate staged and costumed performance of Stravinsky’s The Soldier’s Tale.

The concert was a partnership with Arts University Bournemouth whose undergraduates displayed their work in illustration, costume, creative writing and performance design on the theme of Petrushka.

A stunning collaboration on a wonderful evening showcasing an incredible range of talent.

TheGallery works with courses right across the university on a variety of exhibitions, events and projects. Magical Fairytales is another example of one of these projects that we have worked on with the curator and students. When working on a collaborative project we provide advice and support for the curatorial and technical aspects of the exhibition, as well as advice on event and project management.