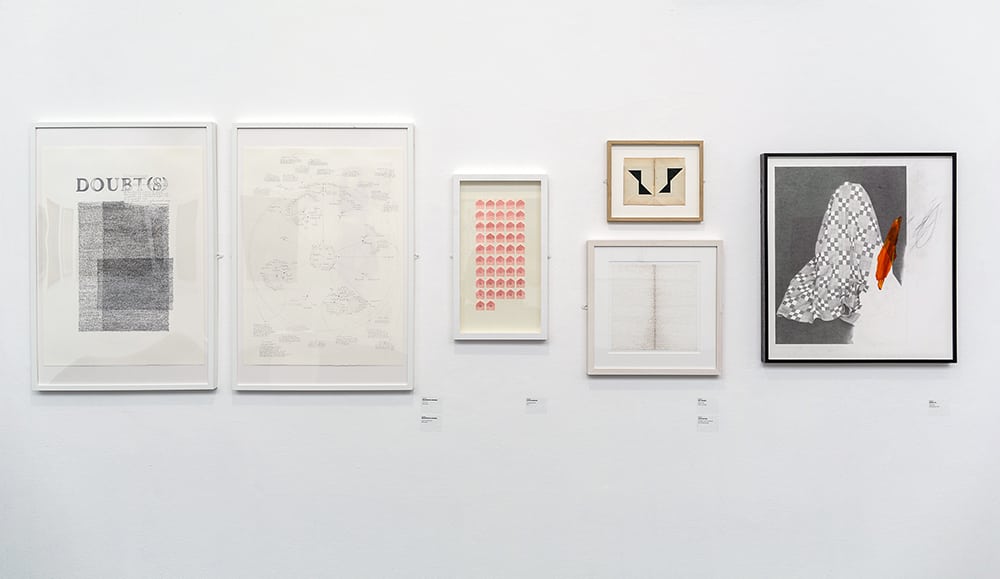 The largest and longest-running annual open exhibition for drawing in the UK, this exhibition showcases the work of UK-based drawing practitioners, from student to established, helping to define a wider understanding of the role of drawing in creative practice.

This year 61 works by 55 artists have been selected from 2,537 submissions from across the UK by Glenn Brown, Artist, Curator and Director; Stephanie Buck, Kupferstich-Kabinett at Staatliche Kunstammlungen Dresden and Paul Hobson, Director of Modern Art Oxford.

The Jerwood Drawing Prize 2016 is a nationwide touring exhibition. It will be on show at the following venues between 2016 and 2017:

Jerwood Drawing Prize is committed to championing excellence and promoting the breadth of contemporary drawing practice. In offering emerging, mid-career and established artists a national platform to exhibit their work, the exhibition has established a reputation for developing new insights into the role and value of drawing in artistic practice today. The 20th anniversary of the Jerwood Drawing Prize exhibition was celebrated in 2014, and in 2015 Jerwood Charitable Foundation marked 15 years of its support for the prize.

Jerwood Charitable Foundation is dedicated to imaginative and responsible funding of the arts, supporting artists to develop at important stages in their careers. The aim of its funding is to allow artists and art organisations to thrive; to continue to develop their skills, imagination and creativity with integrity. It works with artists across art forms, from dance and theatre to literature, music and the visual arts.

Since the inception of the programme in 2006, Jerwood Charitable Foundation has channelled a total of £4m, working with more than 1200 visual artists, writers and curators from across the UK and supporting a wealth of research and new commissions for audiences now reaching 60,000 a year.

Bath School of Art & Design at Bath Spa University, was founded in 1852 and has been nurturing the talent of artists and designers ever since. Bath Spa University is a leading educational institution in creativity, culture and enterprise. Professor Anita Taylor, Director of the Jerwood Drawing Prize, became the Dean of Bath School of Art & Design in June 2013.

Glenn Brown
Glenn Brown is a British artist, best known for using art historical references in his paintings.Starting with reproductions from other artist’s works, he transforms the appropriated image by changing its colour, position and size. He has recently paused from painting and has become preoccupied with drawing in a range of media and surfaces, exploring many new directions for his art and sources. His work has been the subject of numerous solo exhibitions including at Jerwood Space, London (1999), Serpentine Gallery, London (2004); Kunsthistorisches Museum, Vienna (2008); Tate Liverpool, England (2009), Rennie Collection, Vancouver (2013), and the Fondation Vincent Van Gogh Arles (2016). He has a forthcoming solo show at the Rembrandt House, Amsterdam (2017). His work is represented by Gagosian Gallery in New York and London and Galerie Max Hetzler in Berlin and Paris.

“One thing that troubled me repeatedly throughout the discussion and selection was wondering whether one of my drawings would qualify if it was put into this rigorous and cruel competition? How would my drawing measure up? So, since being a judge, I always try to mentally place the drawings I am making into the context of the prize. Which so far leaves me feeling: no, that wouldn’t make it, it’s not good enough, it’s not relevant and it’s too stuck in the past. The major effect the prize has had on me is to greatly improve my own drawings by giving me new critical faculties in judging them.” Glenn Brown

Stephanie Buck
Stephanie Buck is the Director of the Kupferstich-Kabinett in Dresden, Germany, one of the world’s oldest and largest collections of drawings, prints and photography. From 2006 – 2015 she lived and worked in London as the Curator of Drawings at the Courtauld Gallery where she curated numerous exhibitions and coordinated the research activities of the IMAF Centre for the Study and Conservation of Drawings. She held previous positions in museums and universities in Berlin, Frankfurt and New York. A particular focus of her research is Northern European prints and drawings.

“Judging the Jerwood Drawing Prize has been an extraordinary and energizing experience. It was a rare privilege meeting so many different interpretations of drawing today. Spending two whole days looking intensely. Diving into the process of selection, staying focused and excited, and trying to encounter each individual work with the respect it deserves. Not judging too quickly. Staying open rather than looking for works of art that meet one’s own expectations. Expanding one’s views and struggling with the hard task of choosing. Learning from fellow judges through continuous discussion. Being challenged and surprised.” Stephanie Buck

Paul Hobson
Paul Hobson is the Director of Modern Art Oxford, which has an international reputation for cutting-edge exhibitions of modern and contemporary visual art. He joined as Director in August 2013, following six years as Director of the Contemporary Art Society and former senior roles at the Showroom Gallery, Serpentine Gallery and Royal Academy of Arts, London. Paul read History at Oxford University.

“It was such an interesting and enjoyable process being a selector for the 2016 Jerwood Drawing Prize, but certainly very challenging to shortlist from thousands of diverse and highly accomplished submissions. The quality and breadth of works was staggering, with technically executed pieces of conceptual, figurative and abstract drawings, along with works that pushed the idea of drawing to its limits, generating a great deal of discussion by the judges. To see such a wide range of approaches to drawing attests to the relevance and enduring vitality of the practice of drawing in contemporary visual culture, no doubt stimulated and supported through the Jerwood Drawing Prize itself.” Paul Hobson