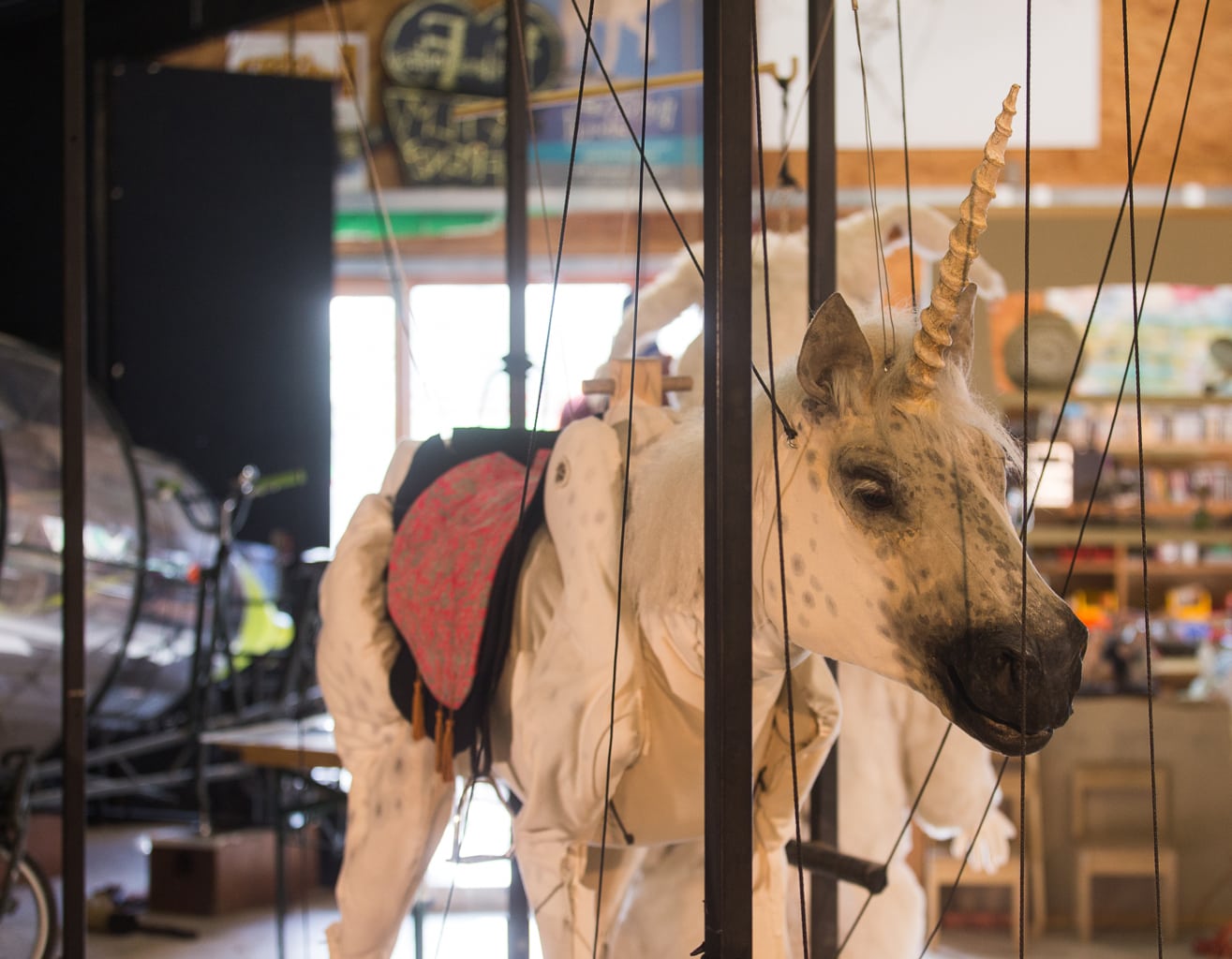 Please arrive by public transport. For information on how to get here please visit our find us page, download our Bus Map or visit The Bus for BU for more transport information.

Our car park is open to the public from 3.30pm on weekdays and all day on Saturday.

Parking spaces can be reserved for visitors with restricted mobility between the hours of  9am and 3.30pm on weekdays by contacting TheGallery at gallery@aub.ac.uk or on 01202 363 272

“For years the company has been delighting audiences across the country with their blend of humour, surrealism, and intelligent mind-bending wackiness….There is no other theatre group mixing and matching so many different types of media with such inventiveness.” (Film director and ex-Python Terry Gilliam)

Since the mid 1970s, ground-breaking multi-media theatre company Forkbeard Fantasy have been widely acclaimed for their joyous mix of visual trickery, amazing sets, puppets, cartoons and their pioneering work bringing film to the contemporary stage.

Meet The Horse, chinwag with The White Rabbit, operate life-size puppets, or just meet old friends from Forkbeard Fantasy’s surreal and colourful past.

Forkbeard is one of the UK’s great trailblazers of multi-media performance – pioneers of the use of film, animated sets and cartoon live on stage.

Forkbeard Fantasy are Honorary Fellows of AUB, awarded in 2011 for their significant contribution in the field of theatre.

For the latest news, updates and behind the scenes information on TheGallery please like us on Facebook

Sean Aita is Director of External Affairs at Arts University Bournemouth.  He has overall responsibility for Marketing, International Development, TheGallery, Preparation for Higher Education, Short Courses, Widening Participation and English for Academic Purposes at the University.

Sean originally trained as a classical actor at the Bristol Old Vic Theatre School, and performed professionally in a wide range of genres on stage, film, television, and radio. Sean is an award winning theatre director and playwright, with a specialist interest in cross disciplinary performance models.

His performance highlights include appearing in Ingmar Bergmann’s Hamlet at the National Theatre; working with Anthony Mingella in originating the role of Walter in one of his first plays Two Planks and a Passion; playing the title role in Oscar Wilde’s An Ideal Husband at the Westminster Theatre opposite Jeremy Sinden, and working in the West End musical Buddy.

Sean moved into directing by observing and assisting at the Royal Opera House and English National Opera, before starting his own company Animus in London. He became Associate Director at the Royal Theatre Northampton, where he won the Checkout Theatre award for his play Yallery Brown, co-produced with Forkbeard Fantasy, which subsequently transferred to Greenwich Theatre.

He has had a twenty five year association with Vienna’s English Theatre in Austria where he has written, adapted and directed work seen by over 100,000 young people each year. As artistic director of regional touring theatre company Forest Forge, Sean’s work was short-listed for the Stage Award for Achievement in Regional Theatre, for his season of productions in 2005/06.

In 2013, Sean was awarded an Associate Professorship in Theatre by the Arts University Bournemouth to recognise his achievements in Professional Theatre.  Sean has written extensively on applied and community theatre and on actor training.

As Chair of TheGallery group Sean has oversight of the Arts University Bournemouth’s innovative text + work programme, a concept which underpins the exhibition programme supporting  scholarship and research at the AUB.

Forkbeard has been evolving for nearly 40 years. Originally started in 1974 as an experimental performance art group, it has developed into what is now a thriving multi media arts company, producing and presenting their highly individual brand of comic surrealism across the UK and abroad without stop. This makes Forkbeard one of the UK’s longest surviving independent performance companies.

Much of the company’s development has been based around touring theatre shows. However this is just one element of a diverse field of work. Forkbeard have a broad range of skills in street & stage theatre, writing, poetry, animation, film-making, mechanical installations & interactive sculptures. Everything we do carries the common themes of innovation, humour and invention, and all with a unique Forkbeardian twist. Still true to its avant-garde origins, the work, be it stage show or mechanical museum exhibit, champions magic, entertainment and fun. On stage the Forkbeard trademark mix of film, animation, cartoon with live performance in the 1970s set them apart as pioneers of a new wave of multi-media theatre.

Forkbeard Fantasy are a British theatre company who have been creating intermedial work since 1974. Their theatre work combines animation, video, puppets, animatronics and live actors with a sense of humour reminiscent of Monty Python. They specialise in an imaginative blurring of the boundaries between what is live and what is pre-recorded using a technique that they call ‘crossing the celluloid divide’.