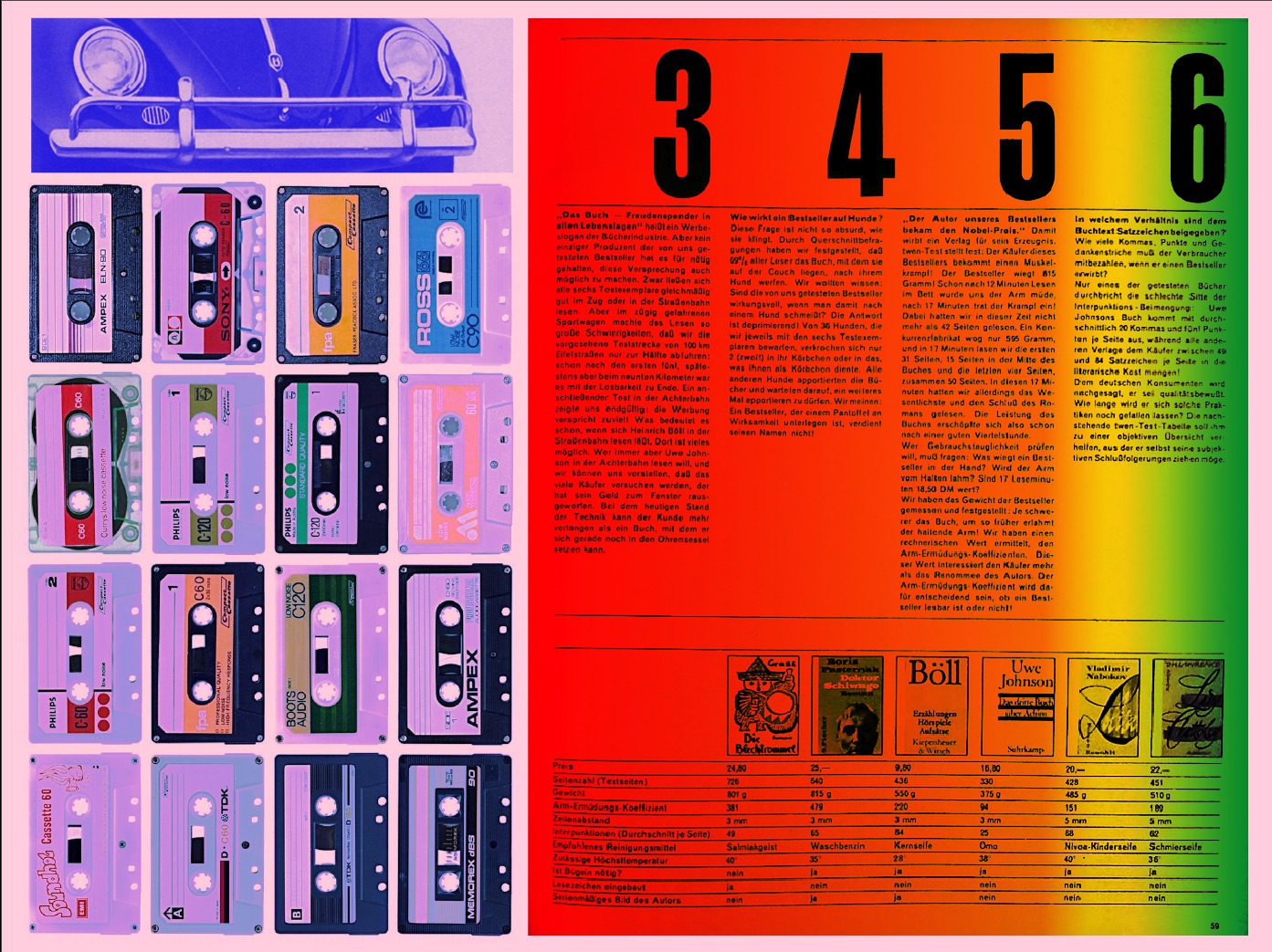 Created between 1965 and 1970, Paolozzi’s canny alchemy is vividly apparent in General Dynamic F.U.N. The series illustrates how the self-styled ‘wizard in Toytown’ employed the technologies of mass-reproduction to gorge on its idols – the household names and familiar faces of consumer advertising, high fashion and Hollywood in the 1960s.

A compulsive collector and jumbler of icons, Paolozzi is equally revered for his mechanistic sculptures and his kaleidoscopic print projects. He transformed the mundane, the derelict and the mass-produced into images that zap with electric eclecticism and impress with their graphic complexity. The artist’s friend and sometime collaborator, J.G. Ballard, described General Dynamic F.U.N. as a ‘unique guidebook to the electric garden of our minds’.

The prints, which bear idiosyncratic titles such as ‘Totems and Taboos of the Nine-to-Five Day’; ‘Twenty Traumatic Twinges’ and ‘Cary Grant as a Male War Bride’, do not occupy a rigid sequence but can be assembled and viewed in any order.  For Paolozzi, the modern age, exposed as ephemera, is a necessarily fragmented collision of visual stimulus and influence, and his work is a ‘health warning for an uncreative and thriftless society’.

Sir Eduardo Luigi Paolozzi (7 March 1924 – 22 April 2005) was a Scottish sculptor and artist. He was born on 7 March 1924, in Leith in north Edinburgh, Scotland, and was the eldest son of Italian immigrants.

Paolozzi studied at the Edinburgh College of Art in 1943, briefly at Saint Martin’s School of Art in 1944, and then at the Slade School of Fine Art at University College London from 1944 to 1947, after which he worked in Paris. While in Paris from 1947 to 1949, Paolozzi became acquainted with Alberto Giacometti, Jean Arp, Constantin Brâncuși, Georges Braque and Fernand Léger. This period became an important influence for his later work.  For example, the influence of Giacometti and many of the original Surrealists he met in Paris can be felt in the group of lost-wax sculptures made by Paolozzi in the mid-1950s. Their surfaces, studded with found objects and machine parts, were to gain him recognition

He is widely considered to be one of the pioneers of pop art.  Eduardo Paolozzi was a prolific and inventive artist most known for his marriage of Surrealism’s early principles with brave new elements of popular culture, modern machinery and technology.

They collaborate with artists, independent curators, writers and partner institutions to develop imaginative exhibitions that are seen by up to half a million people in over 45 cities and towns each year.

William Hernandez Abreu has over 20 years of experience of working in performing arts; with a focus on dance, music and set design/making. William is a music designer, curator and exhibition designer.  He is currently the technician at TheGallery, Arts University Bournemouth. William is an active member of TheGallery Group and contributes to establish TheGallery as a leading university gallery with an international programme of exhibitions and events.

William Co–Curated Suddenly Last Summer 2018, with fellow Curator Violet M. McClean. He also designed and choreographed the dance for the Ancient Art of Rituals event that was a part of the Black Mirror: Magic in Art exhibition and documentary project.  He produced the music and the concept for the Dazzle & The Art of Defence performance this year.

William is responsible for the co-ordination, production, exhibition design and the technical delivery of TheGallery’s annual programme of exhibitions and events, and the care of the AUB and Arts Council collections. He is the lead Technician on TheGallery’s Touring Exhibitions Programme.

TheGallery showcases work by contemporary artists and designers from around the world, including collections on loan from major galleries and museums.

This is TheGallery’s third Summer to host an exhibition from Hayward Touring Programme.

Autobiographical Series (1994) captures some of her deepest thoughts and memories, whilst the set of 11 drypoints (all from 1999) brings these anxieties into more abstract territory.

A Hayward Touring exhibition which featured 35 lithographic prints of the famous cut-outs, produced in the last four years of his life, and included many of his iconic images such as the Snail and the Blue Nudes. This exhibition formed part of TheGallery’s Summer Programme of 2017.

TheGallery works with a range of organisations across the local and regional area to provide the community with greater access to contemporary art. This includes WestBeach, at the Pier Approach, Bournemouth. This year we are exhibiting Visions Of Colour which was a response to the Hayward Touring Exhibition Matisse: Drawing with Scissors: Late Works 1950-1954.