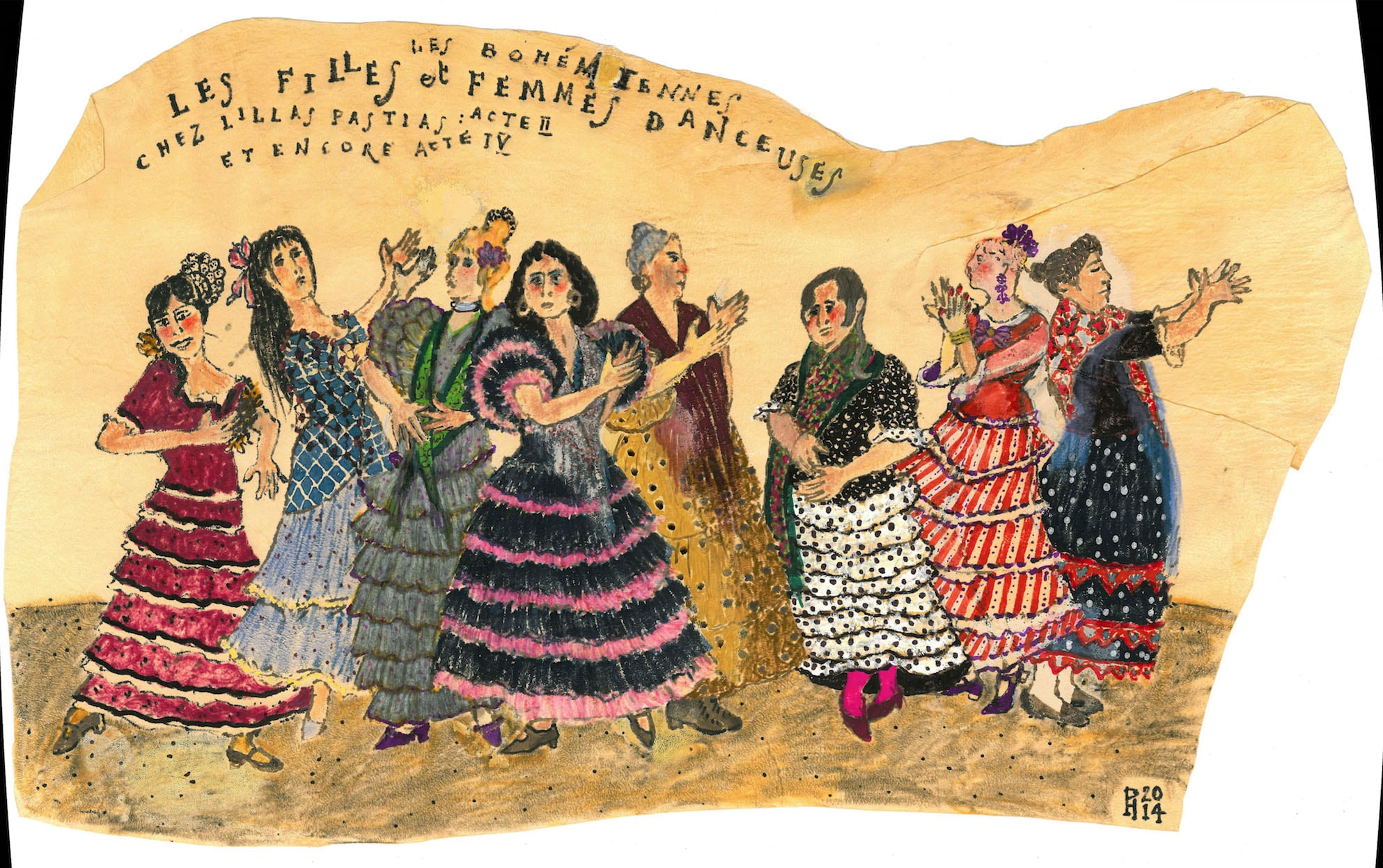 Curated by Rebecca Pride and Co-Curated by Sam Edwards

The Gallery welcomes ‘Drawing Theatre’ an installation of work by internationally renowned Director, Scenographer, Curator and Educator Professor Pamela Howard OBE, author of What is Scenography? a book that has become a classic text in contemporary performance practice.

The installation focuses on six recent works with music, including The Greek Passion, The Marriage, and Pamela’s critically acclaimed interpretation of Bizet’s opera Carmen for the Ljubljana Slovene National Theatre Opera and Ballet. Most unusually within theatre and opera, Pamela works as both Director and Scenographer.

Pamela begins her creative process with a pen or pencil and draws her way to the first night, using her highly developed and individual drawing skill as a tool to communicate her ideas and vision to her performers and creative team.

“When I first enter a new performing space and gaze into its void, I am always filled with the fear that I will never be able to create anything meaningful this time. But, I have learned over the years that fear is the partner of creativity, and one does not come without the other. Then I remember I have strategies to penetrate the darkness of the unknown. I look at the dimensions of space, its height, its width, its diagonals and make a visual notation. Then I try to imagine how a person looks there, and then how many people can fit into that space. I draw them, and suddenly I have started ‘Drawing Theatre’ “

As a passionate advocate of drawing, Pamela has created this installation in response to a highly original, purpose-built drawing studio, bravely commissioned by Arts University Bournemouth and designed by internationally acclaimed architect and AUB alumnus Sir Peter Cook RA. In this architecturally uncompromising building, the centrality of drawing is acknowledged and celebrated.

Pamela Howard is a Director and Scenographer working primarily in opera and contemporary music theatre. Her practice encompasses large and small scale productions, in major opera houses and unloved and forgotten spaces.

Sustainability and imaginative use of space are central to her work, that links to her former training at the Slade School of Art ( 1958/9). A full career as a theatre designer, with a love of text and context, has led her since 2000 to develop an scenographic language of beauty and simplicity on stage, where the performer is always ‘the carrier of the myth’. As a compulsive observer of human life, she is never without a pencil and a sketch book, notating the everyday, methodically storing her pencil sketches and reworking them on stage.

Pamela Howard is often the initiator and creator of collaborative projects that link artists from many countries united through art and music. She is the author of What is Scenography? (2002 1st edition and 2009 2nd edition), that is now translated into 6 languages, and a curator of several theatre related exhibitions.  She is regularly invited to educational events all over the world, and has great joy meeting and working with young people at the start of this long journey of creation.

Rebecca Pride graduated as a theatre designer from the Slade School of Fine Art in 1988 after being taught, like Pamela, by Peter Snow (1927 – 2008) and Niko Georgiadis (1923 -2001). After twenty years in industry, where she designed over 100 shows of every imaginable style from Greek theatre to Chekhov to the ubiquitous Buddy Holly style musical, Rebecca joined the AUB in 2005. In 2009 she became Course Leader and Principal Lecturer (Research and Knowledge Transfer) for BA (Hons) Costume and Performance Design.

Rebecca has curated all the BA Costume final year exhibitions since 2009. The AU79 (Gold) show for 2015 was a particular triumph and Rebecca commissioned the graduate designers from that show to design the 2015 A Stitch in Line exhibition in The Gallery at AUB: a show she curated that celebrated and redefined the centrality of drawing as a conduit for creative expression in the work of textiles artists as well as fashion, costume and performance designers.

The Drawing Theatre installation is the culmination of a very productive creative collaboration between Visiting Professor Pamela Howard OBE and the BA Costume and the Performance Design course team and students. Pamela’s belief and passion for ‘the scenographic costume’ has led and influenced the specific and unique culture within the course. Rebecca is honoured to be given the opportunity to curate such a significant scenographic event within the environment of Sir Peter Cook’s magnificent Drawing Studio.

Sam Edwards trained at The Arts Institute Bournemouth graduating in 2005 with a BA (Hons) Modelmaking. Before starting at AUB he worked in industry as a Production Manager and architectural Modelmaker with such luminaries as Norman Foster + Partners and Zaha Hadid and has also been heavily involved in product prototyping & packaging for global brands such as Coca Cola, Nestlé, Smirnoff and Lucozade.

In 2014, Sam designed the set for an AUB production entitled The Women. For this production he examined the architecture and world of 1930’s New York.

In 2015, Sam worked with Professor Pamela Howard OBE as assistant scenographer for her interpretation of Bizet’s Carmen for theLjubljana Slovene National Theatre Opera and Ballet. He worked with Pamela on the intricate models and scale drawings required for the production. Following this he travelled to Ljubljana to assist Pamela in the weeks prior to opening night.

For Drawing Theatre Sam is delighted to continue his collaboration with Pamela, combining his fascination with architectural space and the relationship of drawing and theatre.