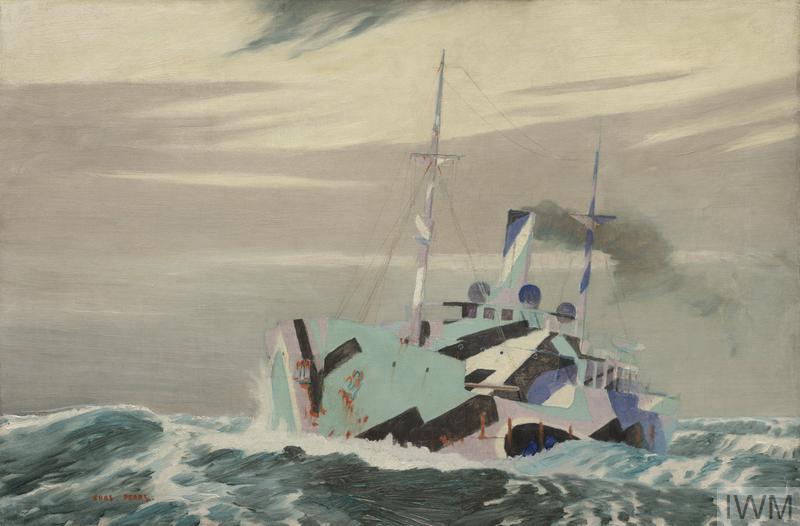 Following AUB’s collaborative contribution to Dazzle: Disguise and Disruption in War and Art, curated by James Taylor and held at the St Barbe Museum and Art Gallery in Lymington, this major new exhibition contextualises the artist Norman Wilkinson’s First World War ‘Dazzle’ schemes of disruptive camouflage against the wider contribution of the arts and creative industries to the defence of Britain in wartime.

In 1917 when U-Boat attacks threatened to knock Britain out of the war, Wilkinson persuaded the Admiralty that patterns painted on the side of the ships would confuse U-Boat commanders as to the direction and speed of the vessels. A team of artists were then recruited to create the ‘Dazzle’ designs and soon ships were sailing out with bold colourful designs.

Reflecting on the roles of photographers, artists, graphic designers, modelmakers and fashion designers during both World Wars, and their influence on contemporary design, the exhibition includes paintings by the Dazzle artists Norman Wilkinson, Cecil King and Leonard Campbell Taylor, as well as scenes of Dazzled boats captured by John Everett and Geoffrey Allfree; wartime information posters by Abram Games and Eileen Evans, uniform fashion photography by Cecil Beaton; and models, photographs and costumes made by the staff and students from BA (Hons) Modelmaking, BA (Hons) Fashion, and BA (Hons) Costume and Performance Design, as well as a Sea Fury cockpit canopy on display from the MoDiP collection.

Held between the centenary of the end of the First World War and the eightieth anniversary of the outbreak of the Second World War, this exhibition is a powerful testament to the contribution of artists and designers in the defence of Britain during both world wars.

Elisa Di-Rosa studied on the BA (Hons) Photography course at the Arts University Bournemouth and graduated in 2017. She is currently the Gallery Administrator in TheGallery at AUB. Prior to this, she undertook a work placement with TheGallery in 2016 while a student, which eventually led to her employment.

Over the years, Elisa has participated in group and solo exhibitions in Henley-on-Thames, Bournemouth and London, as an artist and curator. Her curatorial projects include Escaping the Representations of Reality (2017) at the BUMF Gallery and Louise Bourgeois Prints: Autobiographical Series and Set of 11 Drypoints (2018) at TheGallery. Since graduating, she has continued to practise photography and is aiming to progress with curation and to study further in the art of museum curation.

This hardback was published in the lead up to the centenary of the invention of Dazzle painting in 2017. It is the first publication to address the achievements of the acclaimed marine artist Norman Wilkinson in tandem with his hand-picked Dazzle painting team.

Available to purchase from TheGallery Office or the AUB Online Store.

A pop-up exhibition of objects from the MoDiP collection in support of Dazzle & The Art of Defence exhibition. Plastics & the Home Front explores the role the material played in life at home during the Second World War. Using objects from the MoDiP collections, this pop-up exhibition uses the theme ‘Keep Calm and Carry On’ to look at the in-it-together spirit celebrated in the civilian population.

The gallery, based in Southampton’s burgeoning Cultural Quarter, opened in 1939. It offers the opportunity to enjoy high quality exhibitions ranging from painting, sculpture and drawing, to photography and film, as well as permanent collection and displays that change regularly to ensure new experiences with each visit.

The museum explores the history of Lymington and the New Forest Coast, inspired by local pride, and supported by the local community, its collections and colourful, hands-on displays offer a fascinating insight into the area for all ages.

The model is based on an aerial photograph used in the 1941 British documentary film Target for Tonight directed by Harry Watt and filmed and acted by the Royal Air Force. The film is about the crew of a Wellington bomber partaking in a bombing mission over Germany.

The model uses a combination of modern and traditional modelmaking techniques with the one piece being a finished model the other piece displaying what is inside the model.

Overview
When deciding upon an object to create for the Dazzle exhibition, I wanted to exhibit something that shows the processes we use today to create models as well as methods and materials that were used by V Section during World War II.

I decided to make two models: one to show the finished aerial view in the style of V Section and another revealing the inside of that model and its individual layers. More so than often, it is common to see finished models but less so to see what goes into them. The models were created using modern tools, with the contours made using a laser cutter, allowing the materials to be cut accurately and quickly. The finished piece was completed using more traditional techniques and materials such as an air-drying filler and cork, with it then being painted.

After deciding on the type of models that I would create I needed to choose the subject. I decided that the model would be based on an aerial photograph used in the 1941 British Documentary Target for Tonight directed by Harry Watt. The documentary can be found in the Imperial War Museum Collection.

The documentary has a strong personal attachment to myself as my Great Uncle, Joseph Bird was one of the RAF crew that acted in the film. Although he only played a small part in the documentary, for me it is a strong connection to the past and my family history. The film footage and a few other items are all my family have to remember him by. As is the case with many of those that were featured in the documentary, he didn’t survive the war and was lost over Germany.

While researching this project I also found a photo showing one of the flight crews from 149 Squadron with an example of the art that crews added to the sides of their planes. I feel the artistic creativity shown by these crews and troops during the war is something that should be remembered alongside the work of others in the artistic and creative industries at the time.

Meet the Artist: Jonathan Hoyle
Jonathan Hoyle graduated from the BA (Hons) Modelmaking course at AUB in 2003. Since then he has worked in a wide range of areas of the modelmaking industry. In 2006 he returned to AUB as a Visiting Lecturer working on a variety of courses introducing digital modelling techniques and practices.

In 2017 Hoyle joined the BA (Hons) Modelmaking team full time and works as a Technician Demonstrator.

I was inspired to respond to this exhibition after learning about the work of professional modelmakers during World War II. Dazzle Chess explores the use of disruptive camouflage by combining it with my previous Metropolis chess set design.

Inspired by the study of architectural models, my original design was the result of posing the question “How simple can the pieces be made, so that they are minimal, but still recognisable”. Contrasting timbers and composition of colour and grain differentiate the ‘sides’ while giving the set a homogenised look that closely represents that of professional architectural models. This design relies on the silhouette of the pieces being easily recognisable.

Dazzle Chess explores the idea of disruptive patterns by attempting to spoil my original design in the same way that dazzle patterns were used to spoil a U-boat’s view of its target. Since the original design relies on the recognition of forms to enable the game to be played, it has been interesting to experiment with the disruption of these forms; “Might the disruption still work at such a small scale?”; “How might disrupting the apparent form of the pieces affect the playing of the game?”.

Essentially, the game is still playable when viewed from above, however, attempting to play the game from a ‘U-boat’s eye view’ is more difficult; the field of pieces appearing as one pattern rather than separate forms.

Dazzle Chess has given me an interesting catalyst for discussing with AUB students how I have used modelmaking skills in the production of a different kind of artefact, and how the skills that they are developing are transferable to different disciplines.

Meet the Artist: Will Strange
Will Strange is a senior lecturer on the BA (Hons) Modelmaking course at AUB with a particular interest in teaching the skills needed for architectural modelmaking, and the role that creativity & making have in the design process. Before beginning to teach full-time, Will was a professional modelmaker working with architectural practices including Richard Horden and Future Systems.

Thank you also to the institutions that provided us with loans of works that are on display in the exhibition: Imperial War Museum; National Maritime Museum; Medmenham Collection; The Estate of Abram Games; Southampton City Art Gallery; Bristol Museums, Galleries & Archives; and MoDiP.

TheGallery works with courses right across the university on a variety of exhibitions, events and projects. Dazzle & The Art of Defence is another example of one of these projects that we have worked on with students. When working on a collaborative project we provide advice and support for the curatorial and technical aspects of the exhibition, as well as advice on event and project management.

TheGallery provides a national and international public platform for the arts within the sub-region as we promote the University’s shared passion for excellence in education, industry and the sector. This exhibition is a clear example of this as we provide the exhibiting students with key insights into the industry to develop their skills.