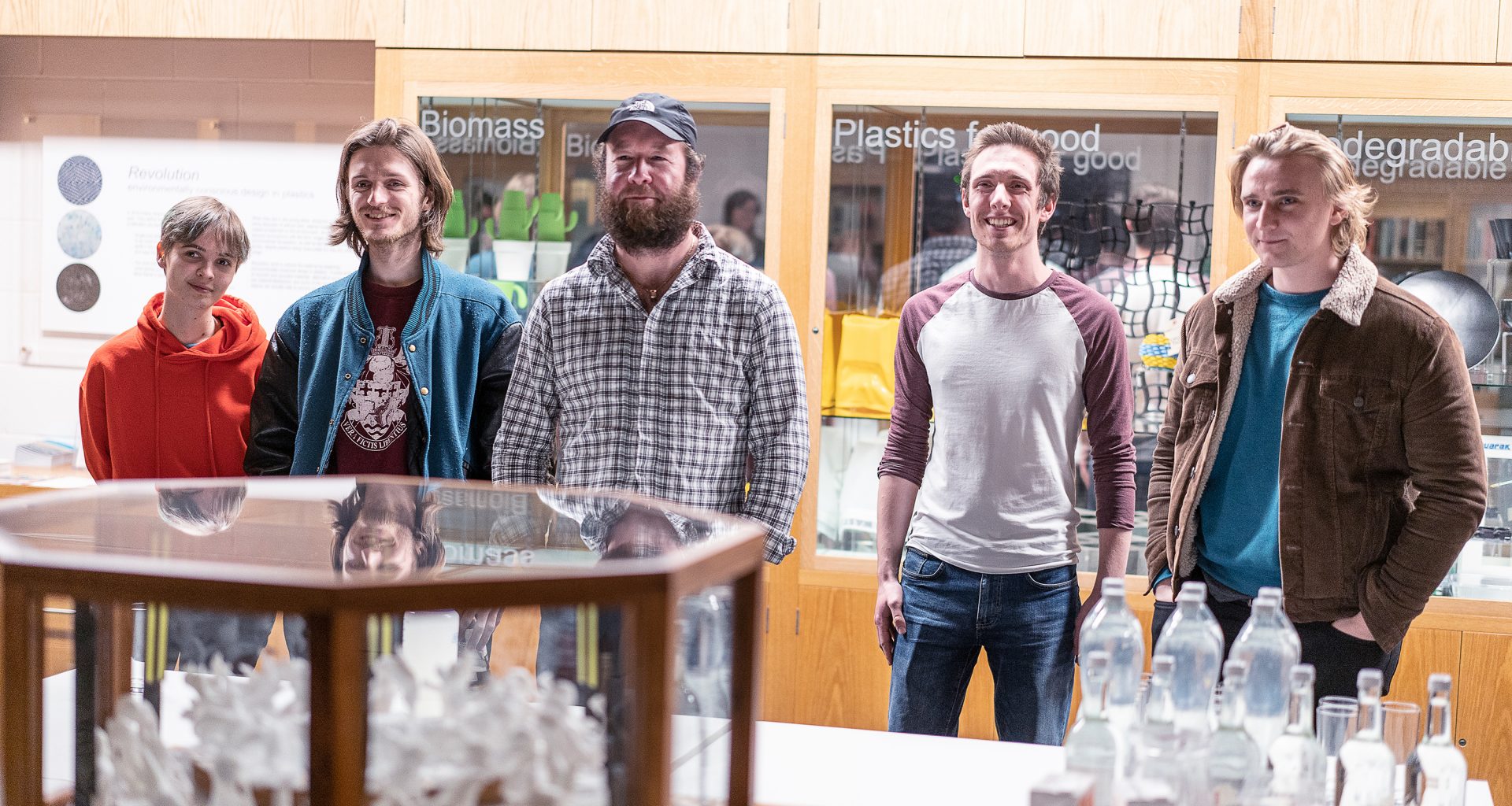 The 2018-19 academic year saw the completion of a 3D printed Zoetrope for an exhibition on campus at the Museum of Design in Plastics.

The Animation presented within the zoetrope, was designed by Ian House and realised by creative initiative BA (Hons) Animation Production students.

The new academic year has provided the opportunity to reprise this Project for a new cohort of students, able to build their own cycle of animation and to exhibit their work within the Live Project Space.

The project brings together the learning of how to build robust puppets and models for computer animation, with the challenge of printing these virtual creations, out of the computer and into physical forms. The output allows for a reflective analysis concerned with the reception of screen imagery in comparison to a physical artefact.

The zoetrope portrays the mechanics of animation to an unfamiliar audience through an intrigue of the magic of movement, character and life. Modelled and animated within the computer, these characters are caught within a perpetual enactment of chaos and delivered with clarity into the physical world.

The Project’s aim was to further awareness and analysis of how the idiosyncrasies of physical craft might embed a more emotional response, through the tactility of the experience. By simultaneously exhibiting the 3D computer model behind the screen of an exhibition monitor alongside the same characters and animations as a physical model, the audience can directly compare their emotional response to an experience where only the tactility and the craft of the presentation has changed.

This work aligns and becomes an integral part of the research into emotional response through tactility in media.

The 2018-19 MoDiP piece was exhibited at Aardman Animation Studios, in the summer of 2019.

The concept behind the model

Within or Without is, in its simplest form, a comparison: a question of effect … How? and Why? is our chance to reflect. Are we moved emotionally by this sleight of hand or this trick of the light? And if our experience is meaningful, does our eye see more than what we might consider to be unfinished, incomplete or imperfect?

“… Perhaps, what we need more than anything is a suspension of belief and a chance to follow our hearts, before our work becomes truly magical.”

“How do we incorporate the effects of these motivations and how do they drive the transformation of our being, either in reflection or as inspiration.”

“By bringing our animation into the real world we instil a delicate wavering of imperfection. This locus of acceptance is a feeling more than a calculation and is easily missed when our work is shaped within the computer.”

The rough stutter, jitter or slip of mishap better imitates a world we know all too well – a place we can navigate freely. The inaccuracies of due process help us to define a sense of texture and tactility that is more in line with sputtered ink, splayed paint or a shattered line. This is the texture with which we might feel our way, bringing our audience suddenly closer to the experience.

Contributing students to the project

His principle concern is development within the Computer Animation Pathway.  His career has encompassed working with market leaders including Industrial Light and Magic, Weta Digital and The Moving Picture Company within the Visual Effects (VFX) sector.

Ian has also enjoyed a formidable career at Pixar Animation Studios in California, creating the modern classics from Carsto Cars 2, including Ratatouille, Walle, Up and Toy Story 3.

His knowledge of VFX and Feature Animation has been shaped by the best in the business and he has witnessed the transition and favour of Computer Animation into the leading filmmaking platform that it now represents.

More recently, Ian has returned to academia to ratify his enthusiasm for storytelling. He has received a Masters’ Degree from Bath Spa University in Scriptwriting, which enables him to inform and guide narrative structure at AUB. His role enables him the freedom to pull from his vast experience and invest in the future industry:

“Story and character are at the heart of every good piece of animation and as filmmakers we must strive to support them both through research, imagination and creative endurance.”

Museum of design in Plastics (MoDiP)

The Museum aims to collect, research, interpret and present artefacts made of or including components of plastics. This adds a unique value to AUB as a leading resource for collaborative, experimental and interdisciplinary research, and as a gateway to the AUB’s wider environment.

BA (Hons) Animation Production provides the technical and creative skills required by professional animation practice. Through a combination of practical and theoretical assignments, the course develops an understanding of animation as an expansive visual language that has multiple creative applications.

BA (Hons) Animation Production here at the University provides you with the opportunity to excel as a creative and critical practitioner in the exciting field of Animation Production. Animation is everywhere: from the classic Disney fairy tale to the quirky Aardman comedy and the dynamic Pixar blockbuster.

At AUB, our Animation studios mirror industry, with lots of students working together in a high energy environment.  Animation starts right here with traditional 2D animation drawing, where fundamental skills of drawing and painting underpin the development of animation production in all its forms: hand-drawn, stop-motion and CGI.

Team-based projects help students to develop their knowledge of specialist roles within an animation production team, with workshops to help develop an understanding of storyboarding, concept design, advanced animation and fundamentals of post-production.

BA (Hons) Animation Production also connects the practice of animation to its critical and theoretical contexts. By contextualising animation through theoretical debate, the course enables students to understand the conceptual foundations underpinning their work. The course emphasises the importance of independent study, research and analysis to extend students creative abilities and inform critical reflection upon their work and that of others

Many graduates have gone on to work in studios all across the world, specialising in areas such as 2D traditional animation, 3D computer animation, stop motion puppet animation, games art direction and many other areas of animation and film.

TheGallery works with courses right across the university on a variety of exhibitions, events and projects. 3D ZOETROPE is another example of one of these projects that we have worked on with the staff and students from BA (Hons) Animation Production and MoDiP.

When working on collaborative projects we provide advice and support for the curatorial and technical aspects of the exhibitions, as well as advice on events and projects management.

The project was a collaboration between MoDiP and BA (Hons) Animation Production students and part of a wider three-week student exhibition of work at MoDiP.