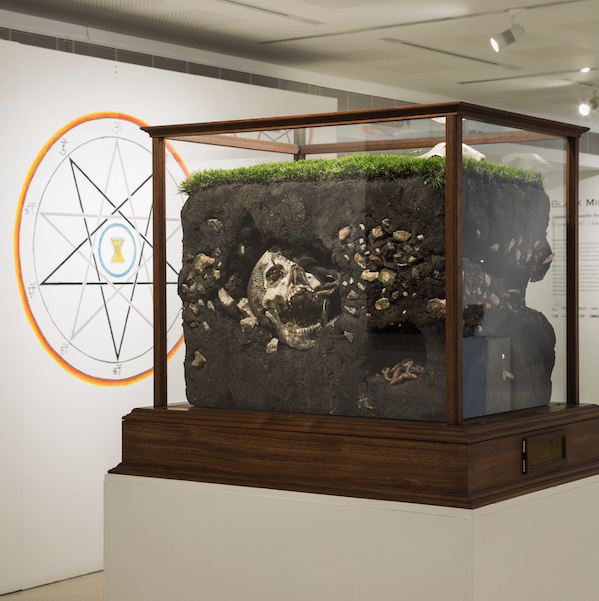 Palo, also known as Las Reglas de Congo, is a religion with various denominations which developed in Cuba among Central African slaves and their descendants who originated in the Congo Basin. Denominations often referred to as “branches” of Palo include Mayombe (or Mallombe), Monte, Briyumba (or Brillumba), and Kimbisa.

The Spanish word palo “stick” was applied to the religion in Cuba due to the use of wooden sticks in the preparation of altars, which were also called la Nganga, el caldero, nkisi or la prenda. Priests of Palo are known as Paleros, Tatas (men), Yayas (women) or Nganguleros. Initiates are known as ngueyos or pino nuevo.

Palo has its roots in the Congo Basin of Central Africa, from where large numbers of Kongo slaves were brought to Cuba where the religion was organized. Palo’s liturgical language is a mixture of the Spanish and Bantu languages, known as lengua, bozal or habla Congo.

This performance has been inspired by Palo Mayombe religious dance and has been adapted to a performance art piece as a response to the exhibition, Black Mirror: Magic in Art, produced by William Hernandez.

William Joel Hernandez Abreu was born in Cuba and has been dancing from an early age. Having graduated from the School of Ballet and Performance at Jose Maria Romero Escuela Nacional de Show & Expectaculos, which he attended from the age of nine he trained in Ballet, Latin and International Dance. He has over 20 years of experience of working in performing arts; with a focus on dance, music and set design/making. William is a music designer and technician at TheGallery, Arts University Bournemouth.

Julia Alcamo is studying her Masters in Film Production at the Arts University Bournemouth, specialising in documentary film. With a history and passion in dance, she has experience in Ballet, Hip-hop, Khatak, Salsa, and has also taught ballroom dance. Julia is currently working on her second dance film, which explores the physical impact anorexia has on the body. The project is being funded by the Arts Council England as part of the Random Acts project.

Sian Bennett is currently in her final year at AUB, training to become a professional actor on the BA (Hons) Acting course. Drama has always been the subject and course that Sian has excelled at as she has been studying performing arts for over 10 years; including singing, dancing and acting. Alongside her study, she has had the experience of being a choreographer and dance captain within her previous educational institutions. This has allowed her to integrate her knowledge and techniques of the different forms of art into her professional practice, such as physical theatre and creative collaborative events.

Devanshi Upadhyaya is currently in her second year at AUB studying BA (Hons) Architecture. Studying Dance as a subject at GCSE level allowed her to explore the techniques and craft of the art form, as from a very young age, Devanshi was involved in every aspect of singing and dancing. From casual gatherings to performing in an auditorium to over 2000 people, when Devanshi performs, her aim is to evoke emotion depending on the conceptual idea and themes of the piece and to make the audience sense a specific atmosphere portrayed by the dancer. By developing her performance skills over the years, she has been able to combine her knowledge and practice to portray conceptual notions that represent dance in a professional way to create an understanding and appreciation for choreography.

Rasa Vaineikyte is a second year, studying BA (Hons) Creative Events Management at AUB. Born in a creative family of a play writer and a ballroom dance teacher, Rasa was always surrounded by creativity. In school Rasa studied acting, dance and music, allowing her to create performances and events. From a young age, she also practiced ballroom dancing and as she grew older, her interests spanned to learning free style which led to her having the opportunity to design her own choreographed dance routines.

Wayne Martin is the Senior Lecturer for BA (Hons) Costume and Performance Design at AUB. With a history of 20 years working in the theatre and film industry as a costume cutter and maker, Wayne has worked in many aspects of Dance, Opera and Musicals. Wayne’s particular interests lie in Historical Cutting and body sculpting through intricate cut and body shaping. For The Ancient Art of Rituals, Wayne has designed costumes suited for a form fitting look that will allow the audience to see the animalistic body movements of the dancers while keeping the original ideals and appearance of the Las Reglas de Congo religion in Cuba who are the originators of the Palo Mayombe dance.

Charlotte Spruch is a hair and makeup artist based locally in Bournemouth studying in her final year in BA (Hons) in Makeup for Media and Performance at AUB. Charlotte has a background in Art History and Museum Studies and enjoys the intertextuality of her work. The course has given Charlotte the perfect setting to collaborate on theatre productions, fashion shoots and short films. This dance performance is an exciting opportunity to learn and experiment in a new way and see her work under duress of the dancers’ physicality and expression.

The Ancient Arts of Rituals Lecture

Leah Gordon explores the multifarious links between Vodou and art, in both Haiti’s rich art history and contemporary practice. Leah will discuss the use of image, artefact, performance and spectacle within Vodou ritual and the often-interchangeable role of artist and Houngan (Vodou priest). Gordon will explore the liminal space that contemporary artists currently inhabit whilst trying to negotiate their ancestral histories and cultural antecedents within a contemporary art market which still has a conflicted relationship toward ethnographic and ritual objects.

Leah Gordon is a multi-media artist who curates, collects, writes and directs. She works across a variety of media including photography, film and installations, often including commissioned sculpture and painting. In the 1980’s she wrote lyrics, sang and played for the feminist folk punk band, ‘The Doonicans’. Leah makes work on Modernism and architecture; the slave trade and industrialisation; and grassroots religious, class and folk histories. Gordon’s film and photographic work has been exhibited internationally including the Museum of Contemporary Art, Sydney; the Dak’art Biennale; the National Portrait Gallery, UK; Parc de la Villette, Paris and NSU Museum of Art, Fort Lauderdale.

A drinks reception will follow the dance and lecture event.

TheGallery works with courses right across the university on a variety of exhibitions, events and projects. The Ancient Art of Rituals is an example of this.

TheGallery provides a national and international public platform for the arts and these projects within the sub-region as we promote the University’s shared passion for excellence in education, industry and the sector. The many courses we have worked with to create this event is a an example of cross-university collaboration as it provides the students with the opportunity to develop their skills for industry preparation.