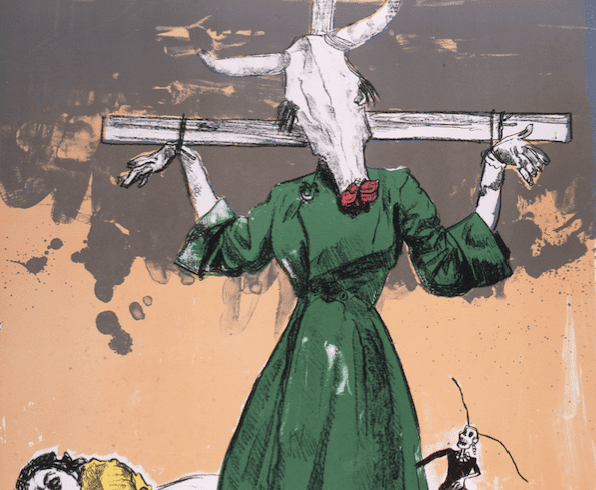 Uncategorised Exhibition in Other locations (Touring)

*Please note, this exhibition is currently unavailable for tour. Please check back for more information

Black Mirror: Magic in Art explores the influences and roles of magic, enchantment and the occult in contemporary art and how they function as aesthetic, conceptual and political forces. Through a multi-disciplined curatorial approach of 2D, 3D, film, video and performance art, Black Mirror will showcase the work of fourteen internationally recognised artists.

Modernism was built in the late nineteenth century, we live within its legacy; the same period created the foundations of modern magic as it is practised and understood today. The magical and occult have been much marginalised within the scholarship of twentieth century art, seen in opposition to enlightenment and progressive values. This exhibition challenges this premise, taking fourteen artists whom draw on the magical to propose that enchantment and occult are intertwined with contemporary issues.

Covering a period over the last thirty years a magical aesthetic is intrinsic to an engagement with environmentalism; feminism; gender; post-digital; neo-liberalism and nationalism. Black Mirror is an exhibition where the magical, occult and enchanted are activated as progressive forces that question and direct the flux in this uncertain age.

Dominic Shepherd is Dorset based Artist and Senior Lecturer in MA Fine Art at the Arts University Bournemouth. He studied at the Chelsea School of Art and graduated with both a BA and MA in Fine Art. Dominic is a prize winner of the 2004 John Moores Prize, a prestigious prize that showcases avant-garde paintings. In 2008, he undertook a research fellowship at AUB and in 2015, he was made an Associate Professor at the University.

He has exhibited internationally with an extensive record of group and solo shows in London, New York, Berlin and Los Angeles and is represented by Charlie Smith London. He has also been included in and written for, various publications.

Dominic is presently the co-coordinator (with Judith Noble and Jesse Bransford) of the Black Mirror Network that explores the influence and role of Enchantment, the occult and magic in modernist and contemporary art.

As part of his doctoral research, Willem investigated the historical and conceptual connections between architecture and alchemy, focusing on texts published during the early seventeenth century (the literary baroque). He has made books incorporating material drawn from these sources to construct spaces for contemplation and wonder in the largely forgotten tradition of the emblem, a favourite medium of literati, occultists and alchemists alike. The Black Mirror: Magic in Art publication will again revisit this tradition through its emphasis on the interplay between the verbal and the visual in its design.

The exhibition will be available for tour, for enquiries and further information please contact: thegallery@aub.ac.uk

The Black Mirror: Magic in Art exhibition began and originated at the TheGallery, Arts University Bournemouth in 2017. The exhibition explored the influences and roles of magic, enchantment and the occult in contemporary art in conjunction with the work of The Black Mirror Research Network. This network originated at AUB with their work exploring the influence and roles of magic in modernist and contemporary art in an international context.

TheGallery at the Arts University Bournemouth presents as part of Black Mirror: Magic in Art, the documentary, The Ancient Art of Rituals: Palo Mayombe.

In response to the exhibition, staff and students from AUB performed their interpretation of the Palo Mayombe ritual dance that originated in Cuba. The performance was part of The Ancient Art of Rituals event held on 18 January 2018 and has been adapted into an art film showing behind the scenes with the curators and dancers.

The documentary goes into more depth about the ritual dance and its origins and features interviews with each of the dancers and the exhibition organisers. It will be featured on display as a part of the touring exhibition.

Black Mirror: Magic in Art features works and biographies by the artists participating in the Black Mirror: Magic in Art exhibition hosted by TheGallery, AUB. It also contains an introduction by Dominic Shepherd, which contextualises the work on display; a contribution by Professor Emma Hunt, AUB; and essays by Jesse Bransford and Willem de Bruijn that open up further avenues of investigation into the realm of magic, art and architecture. Not exactly a conventional exhibition catalogue, the publication aims to present a selection of work within a space different from that of the gallery, but equally committed to bringing about thematic connections between the artists and their work.

Available to purchase from TheGallery Office or the AUB online store

Interview: Dominic Shepherd on Black Mirror, art and the occult

Interview by Rupert White on artcornwall.org

Art Cornwall is an online art journal compiled and edited in Cornwall, UK.

How did ‘Black Mirror’ first come about? Who was behind it?

Judith Noble and I met at the Arts University Bournemouth in 2013. We established fairly quickly our mutual interest in the occult and magic. Judith saw my artworks in an exhibition in London (eg ‘Baptism‘ (2012) right), and she was organising ‘Visions of Enchantment‘ conference at Cambridge University with Dan Zamani.

Through discussion we realised there was a space and need to create a platform that explored the influence of the occult, magic and enchantment on modern and contemporary visual arts. We formulated, with the help of Arts University Bournemouth, the premise for the Black Mirror research network. Very quickly Robert Ansell of Fulgur Esoterica joined us in wishing to publish a series of volumes to further our aims, which was fantastic.

Through Robert we met Jesse Bransford (cf picture below left) of New York University and so it has grown into an international network. Still it grows.

Read more of the interview at artcornwall.org

The Black Mirror Research Network originated at Arts University Bournemouth and explores the influence and roles of magic, the occult and enchantment in modernist and contemporary arts in an international context.

The network is a partnership between AUB, Plymouth College of Art, NYU Steinhardt and publisher Fulgur Esoterica. The network promotes and facilititates  publicates , exhibitions, conferences and other events.  The next Black Mirror event is Seeking the Marvellous: Ithell Colquhoun, British Women and Surrealism, 22nd and 23rd March 2018 hosted by Plymouth College of Art.

Steinhardt – New York University
NYU Steinhart’s mission is to advance knowledge, creativity, and innovation at the crossroads of culture, education, and human development with their integration of education, communication, health, and the arts.

Fulgur Esoterica
FULGUR is the leading independent publisher of esotericism and magic in visual culture. They work with artists and writers to develop projects that explore ideas of enchantment, relevance and agency.

Charlie Smith London
Charlie Smith London was established in October 2009 with the objective of running an exhibition programme of dedicated one person exhibitions and dynamic curated group shows. Specialising in emerging to mid-career artists, the gallery’s approach is collaborative and curatorial and emphasizes work that engages critically with profound human and historical themes.